The Blonde Bitch Belly Tanker Defines What Bonneville Is All About. Build Photos, Video, And More. 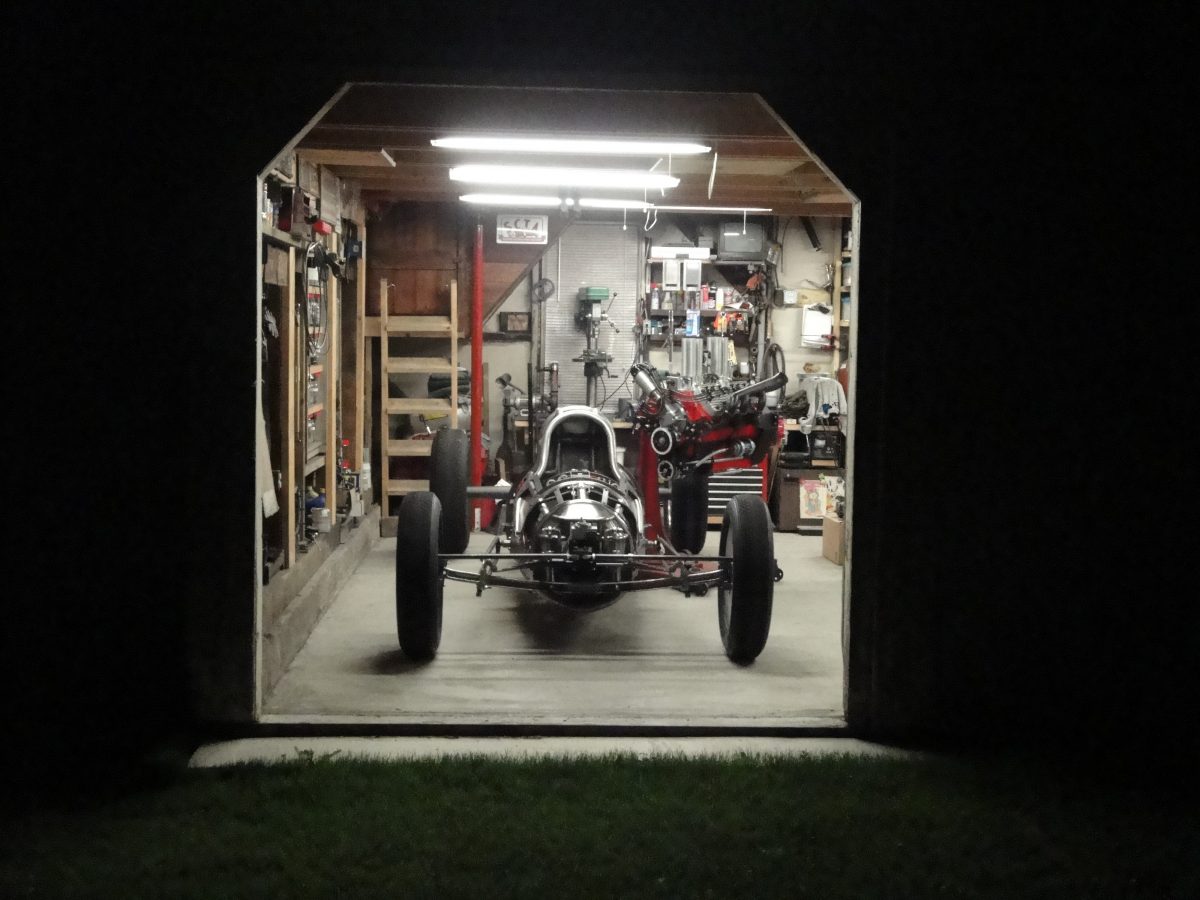 There is no place like Bonneville. Racing, or watching, Speed Week is one of the most amazing automotive events and magical to all that attend. And no matter how hard we try, we can’t write or verbalize what it is really like to be there. No other racing location is Bonneville. And no place has the same vibe and personality. It truly is one of the most special places in the racing world, both currently and historically. So when you find a cool story, about people building and racing cars just for Bonneville, you want to share it. And that’s exactly what we’re doing with the Blonde Bitch Belly Tanker. Built specifically to run at the SCTA-BNI Speed Week at Bonneville, where no money is given and trophies are pretty small, this may be the ultimate family centric motorsport venture for the Welker family.

The Blonde Bitch is an XF/GL, X meaning Vintage Engine, F for engine size, G for Gas, L for Lakester. So it is a Flathead V8 powered, naturally aspirated on gasoline, Lakester. The difference between a Lakester and a Streamliner is the fact that the wheels are out in the open on a Lakester. Covering them makes it a Streamliner. Lakesters are arguably much more traditional than Streamliners, although both have been around for a very long time on the salt. 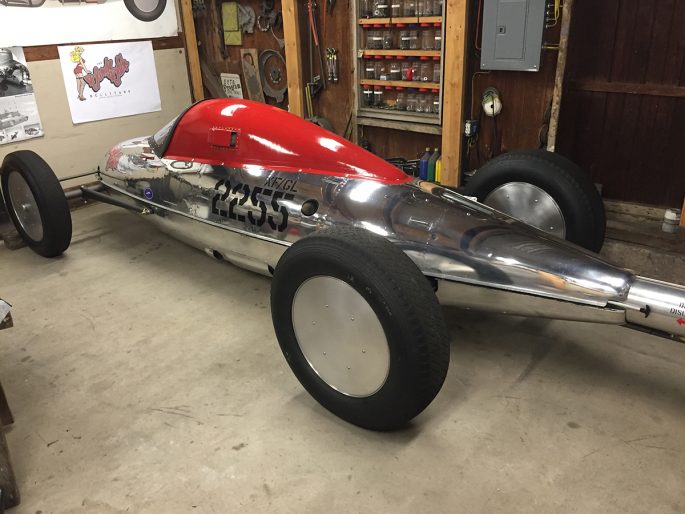 This car was built at home, to be as traditional as current safety requirements will allow, but was done by Andrew Welker who is an engineer by trade so he does get kinda fancy. We’ll allow it, because his work is amazing and we can’t get enough of the photos of the build. When we first found out about the car, which unfortunately isn’t racing at Bonneville this year, we were planning a write up using bullet points from Andrew along with all the information from the family’s website on the car. But then Andrew sent us a really cool email that tells so much of it, so well, that we can’t keep ourselves from using it. 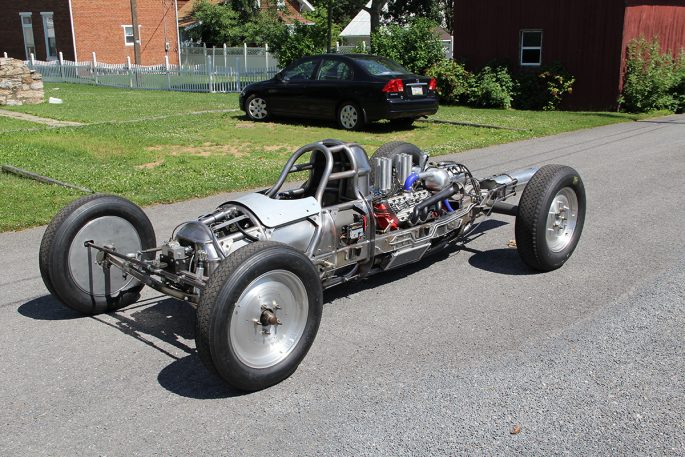 Here are all the specs on the car, and then Andrew’s email to us. There are a few photos in this story, but a complete photo gallery can be found at the bottom of this page with ALL the photos from the build, along with a video from inside during a 165mph plus run. Prepare to spend some time checking them all out, as they are awesome.

Here is all the info, and the story behind it, as written by Andrew Welker himself.

Built from 2007-2012 by me in my massive 18’x18’ barn, help came as necessary from my brother, otherwise was a pretty solo project.  Started when I heard a friend of a friend had an original drop tank in 1998, which I stored in my dad’s barn rafters until time and money permitted.  Spent a lot of time drawing the car in 3d CAD (I’m a mechanical engineer) to figure out the packaging, I didn’t want to stretch the tank, makes it easier but makes the proportions wrong in my opinion.  I wanted to remain as true to form as possible and still be legal to race currently. At the end of the day a belly tank with the tire package I’m using is not the most competitive in the current lakester class, but I was building to an era as well.
As for our crew on the salt, we are all family.  Last year it was my wife (Kim), our then 2 year old daughter (Cora), my brother (Steve), his wife (Ashley) and 2 sons (Brock and Cale), we had to have had one of the youngest average age groups on the salt.  We are from Pennsylvania, so it is quite the trek to get to Bonneville and why we can’t go every year just yet.  Also along was a ’66 VW bug support vehicle.  Not sure if you looked through the blog but part of the adventure was also picking up a 1919 Fordson tractor in Minnesota on the way home.  We didn’t have space to haul it as is so we dismantled it on the spot and loaded the pieces wherever we could.
TO SEE THE VONWELKER BLOG FROM 2015, CLICK HERE AND SCROLL ALL THE WAY DOWN TO THE BOTTOM OF THE PAGE.
For us this is a relatively new experience as we had no land speed racing involvement prior to 2012 speedweek.  We were called rookies and virgins by many that year, and we were. In true fashion it came down to last minute to finish the car in 2012, the first time the car ever moved on its own was on the rookie course for a 133 mph run.  Hopefully the salt survives long enough that we can put some of the younger ones in our crew in the seat.
Ultimately goals are just to go faster.  First we need to qualify for the long course as I was still slowly gaining speed all the way to the end of the 3rd mile. Then who knows, the record in the class is 196 which is very strong.  Next up is a bigger engine and some more aero mods.  The current engine was always intended to be a backup someday, but a super serious race flathead is going to take some serious time and money. That being said, the current engine is no slouch but has taken a beating.  For a naturally aspirated flathead on gas it pulls strong to 6000+ rpm in lower gears and likes to settle in at 5200.
At the end of the day it is fun, we enjoy all the people we’ve met at Bonneville.  Truly an experience that is hard to explain, especially on the east coast.  It’s few and far between to find someone that understands the importance of a red hat, or why anyone would do this if there is no money to win.  Must add that it takes a very under standing wife to undertake a project like this, none the less go along on the journey. However it was hard to explain why $10 worth of duct tape rear axle aero mods made more speed increase than 2 years of upgrades, whoops.
Specs that have changed from compared to website: (2015 updates)

7 thoughts on “The Blonde Bitch Belly Tanker Defines What Bonneville Is All About. Build Photos, Video, And More.”