Take A Look At What’s New At The National Corvette Museum: From New Cars On Display To New Exhibits! 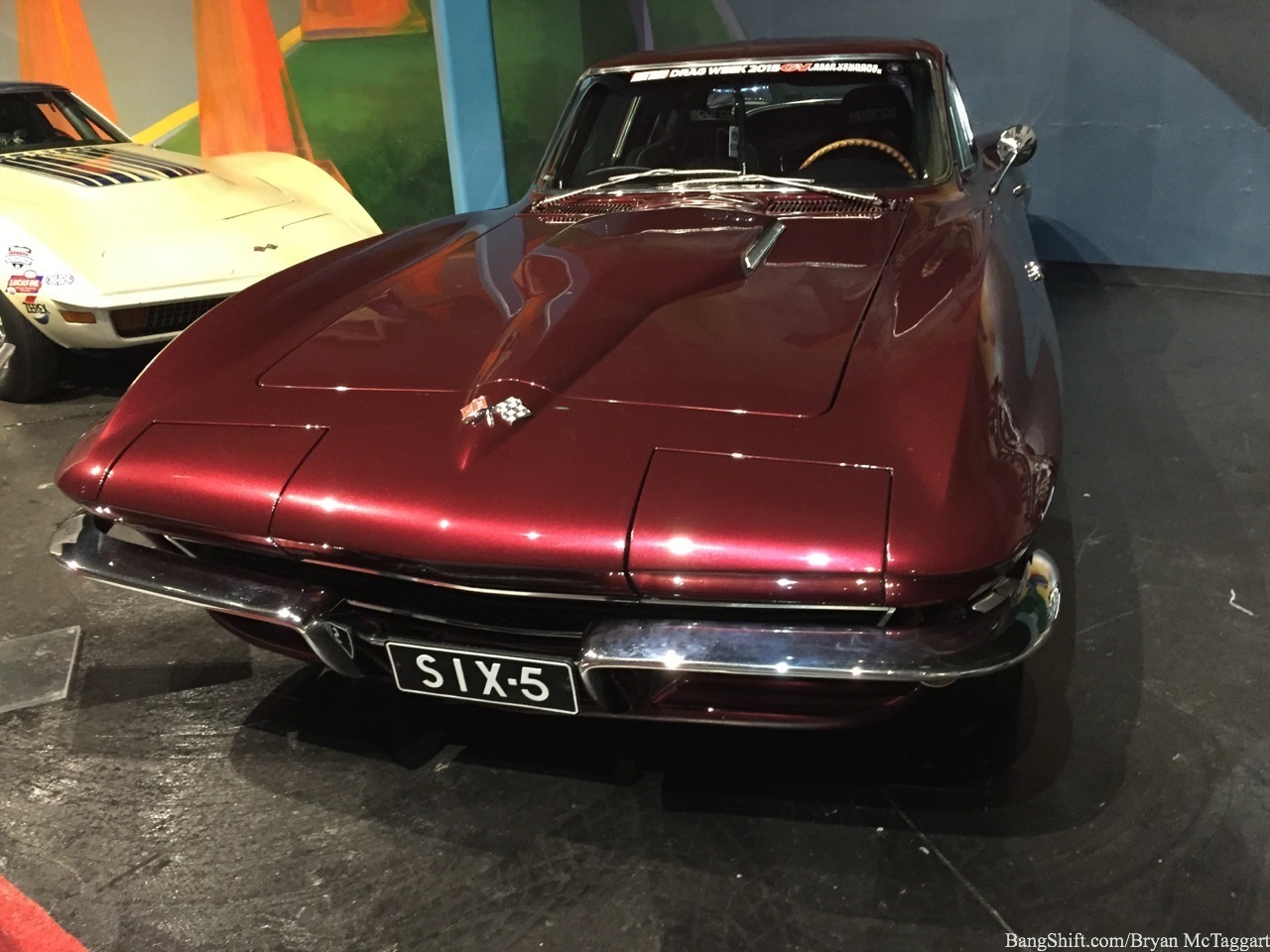 As we continue through winter, we look forward to spring, when the weather finally starts to cooperate and people start getting out of the house for a while. Naturally, we’ve got a long list of events we’re looking forward to covering, but maybe you want something a little slower and mellower, or you might want to just take a couple of hours and check out something neat. With many events coming to Bowling Green, Kentucky this year, the obvious choice to kill some time is at the National Corvette Museum. With the sinkhole filled the situation back to normal, now would be a perfect time to stop by…in fact, since the day was pretty enough here at BangShift Mid-West, we did just that. NCM likes to change up the cars on-hand from time to time, so here’s a rundown on what’s on display: 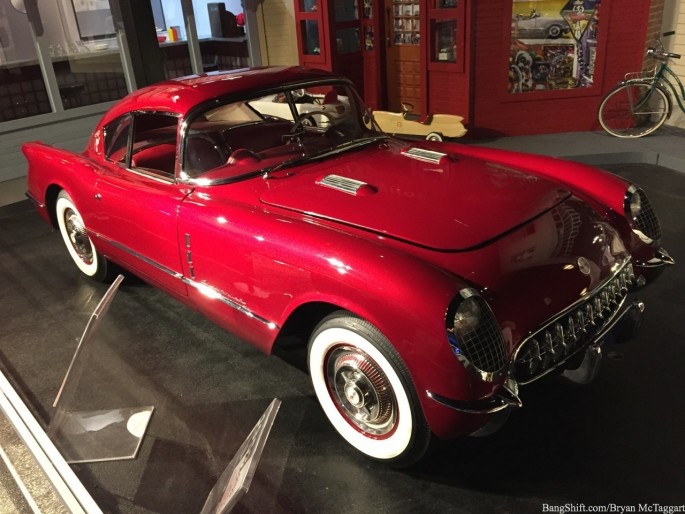 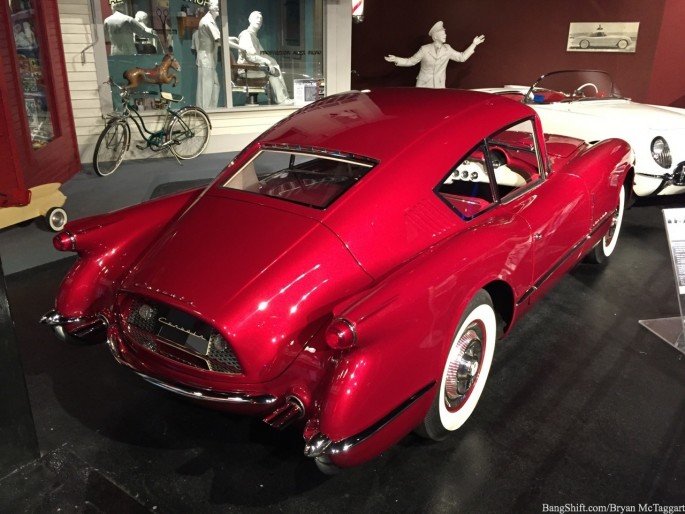 This gorgeous re-creation of the 1954 Chevrolet Corvair concept is one of the first new concepts that will greet you on the way through the museum. The fastback Corvette-based car was displayed at the 1954 GM Motorama in New York City, it was this stunning ruby red, but when it next appeared in Los Angeles, it had been painted sea foam green. While the original Corvair concept was lost to history, this painstakingly detailed recreation is more than enough to give you an idea of what the original car looked like. 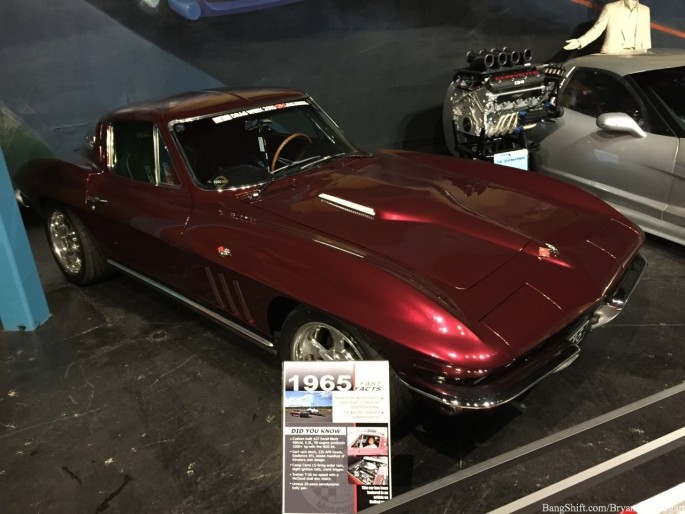 Kimmo Nevalainen’s 1965 Corvette is currently on display. He was invited to display the Corvette and his trailer at the museum after his heroic Drag Week run, that saw blown U-joints, snapped axles, and a trip into a ditch that bent a control arm. Good for 200 miles an hour and 11-second quarter miles all day long, the C2 is far from just a race car…Kimmo put over eight thousand miles on the ‘Vette, from when it came off of the boat until it was parked at the museum! 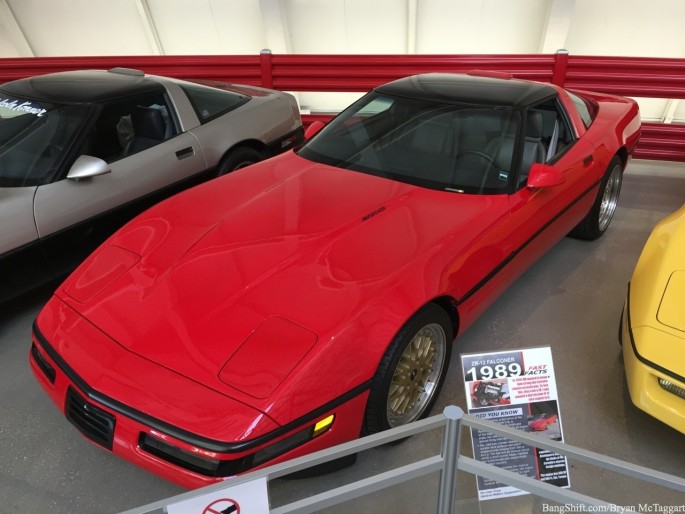 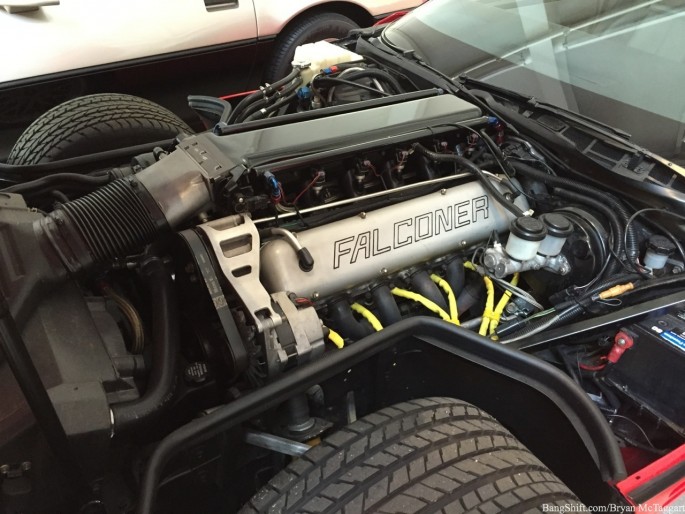 I’ve had the privilege of meeting Ryan Falconer and taking a tour of his Arizona shop, and you will just have to trust me when I say this: the V-12 that is in this modified Corvette ZR-1 is the ugliest engine he’s ever screwed together. Or maybe it’s just well-worn. The Falconer V-12 is basically one and a half small-block Chevrolet V8s melded together to produce power and violence and was meant as a testbed to see if GM wanted to play one-upmanship with the Dodge Viper. Unfortunately, between the engine and the necessary nose job the Corvette required, GM didn’t continue on past this one example.

And that’s just a teaser. On Feburary 12th, 2016, the Museum will open up their long-awaited Skydome Sinkhole Experience exhibit that will give visitors an interactive experience on the story of the infamous hole that opened up in the Skydome area of the museum and swallowed up eight cars, all of which are on display in the Skydome are now. Also on display currently is the American Muscle collection of vehicles (photos in the Gallery) which will last until March 25th. Future exhibits include Indy Cars, which will be shown from June to October, and “Gone But Not Forgotten” exhibit, which will showcase limited production GM vehicles, that will show from October to January, 2017. That’s just the tip of the iceberg on what is going on just at the Museum itself…there is also the National Corvette Museum Motorsports Park a few minutes’ drive away!

To see a schedule of events at NCM, CLICK HERE!

Click any of the pictures below to scan through what is waiting for you to check out at the National Corvette Museum!

Jay Leno Takes Us On A Tour Of Not Just The Ford Mustang Shelby GT350R...But The GT350R That He Personally Bought! Prolong Unveils Their Steve Strope Built 1955 Chevy 210 Wagon At Grand National Roadster Show

One thought on “Take A Look At What’s New At The National Corvette Museum: From New Cars On Display To New Exhibits!”