Jay Leno Takes Us On A Tour Of Not Just The Ford Mustang Shelby GT350R…But The GT350R That He Personally Bought! 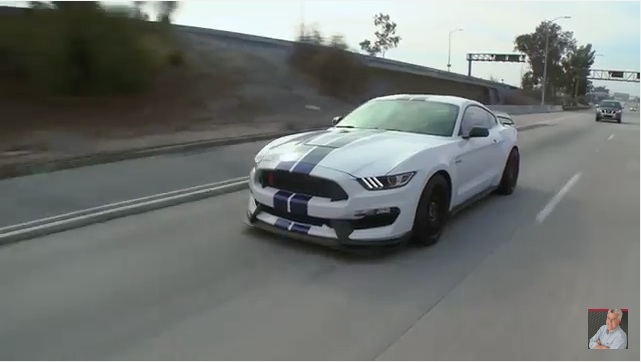 Anyone who ever doubted Jay Leno’s credibility as a car guy, consider this video the ultimate proof that you’re wrong. Sure, he’s got Jay Leno’s Garage, a place that is essentially Willy Wonka’s Chocolate Factory for any gearhead. Yes, he’s known for performing some incredible restorations and yes, he drives his lot. We all know how he can afford to do all of this work…his time on television has put Jay into a position that allows him to do what we all dream of doing. So what, then, would the attraction be to standing in line to purchase a 2015 Ford Mustang? He didn’t do the whole Barrett-Jackson, buy the first one to show off deal…he just went and ordered a car like anyone else can. Jay did it for the right reasons (in our book, at least): He heard about the Shelby GT350R. He heard about the 5.2L Voodoo flat-plane-crank V8, the howling exhaust, the suspension that can embarrass even the more stout competition cars, and he had to have one. With Ford engineer Jamal Hameedi riding shotgun, let Leno explain the attraction himself…after all, there is a 1960s Shelby GT350 that the new car is parked with!

Rolex 24 Race Recap: Results and Race Analysis, and Video From Classes Top To Bottom Take A Look At What's New At The National Corvette Museum: From New Cars On Display To New Exhibits!

2 thoughts on “Jay Leno Takes Us On A Tour Of Not Just The Ford Mustang Shelby GT350R…But The GT350R That He Personally Bought!”