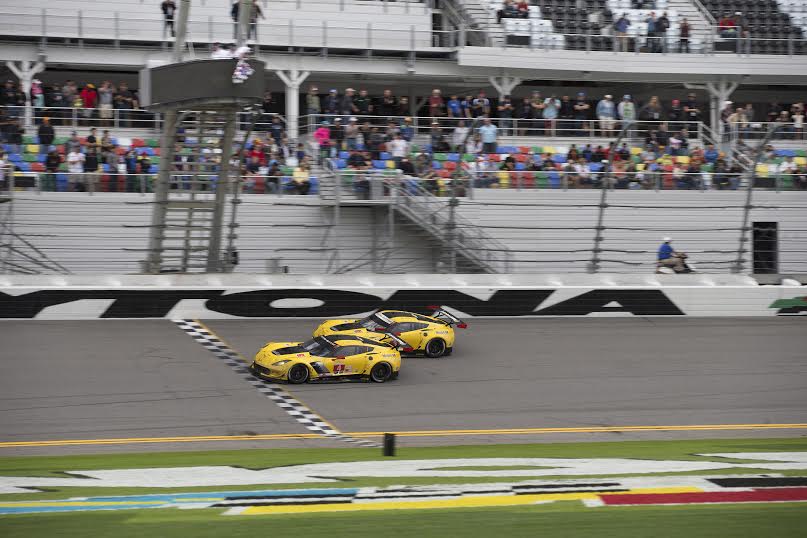 (By Eric Rood) – The dust has settled on the opening round of endurance racing here in the U.S. The race had a bit of everything: tons of attrition, unexpected accidents, heroic drives, photo finishes, and a bit of injury to insult.

In the overall race, ESM-Patron struggled at the Rolex last year, retiring their two cars before night had even fallen. They returned with a Ligier-Honda and a fresh young face in Brazilian Felipe “Pipo” Derani. Derani was untouchable whenever he was in the car (which was often) and he pedaled the ESM car to Honda’s first ever win at Daytona.

Wayne Taylor Racing haven’t won at Daytona in a very long time, coming in runners up so many times and even having a driver-time debacle last year. They came so close again with a second-place finish with Wayne Taylor’s sons/regular driver tandem Jordan and Ricky Tayloer both battling illness while an exhaust leak during the closing minutes of the race actually sent WTR driver Max Angelelli to the hospital. IMSA official announced Angelelli was conscious and stable upon admittance to a local hospital.

The fan favorite DeltaWing looked incredibly strong in the race’s opening hours with Katherine Legge simply blowing the doors off everything else in the Prototype class. Her opening 2-½ hours of the race were simply stunning to watch, which made it all the more painful to see Andy Meyrick crash into a stalled car in a really, really bad place, ending their run and leaving fans to wonder what might have been. The same is also true of Michael Shank Racing’s Ligier-Honda, which looked mighty tough but suffered engine failure only a few hours into the race while leading.

In the GT Le Mans class, the Corvette Racing’s C7.Rs outran the #912 Porsche 911 in the race’s final 30 minutes. With both cars clear of the Porsche, the team gave them free reign to race each other hard and Antonio Garcia in the trailing #3 car gave senior Corvette driver Oliver Gavin all he could handle in the #4. Gavin barely held on with an insane photo finish, beating Garcia by just 0.034 second in a full day of racing.

The eagerly anticipated Ford GT debut fizzled early with actuation problems in the sequential gearboxes and then some death-by-a-thousand-cuts little teething problems. Still, they ran a lot of laps despite being out of contention and showed tremendous top speed; the two Fords went through Daytona’s speed trap 167 times at more than 180 mph, which was 99 times more than the Corvettes did. At a place like Le Mans where top speed matters, that could bode well if they can sort their reliability issues.

Ferrari also brought a new car to renew the old Ford-Ferrari rivalry and Maranello’s trio of brand new 488s showed reasonably well. The Scuderia Corsa Ferrari managed a fourth-place finish while Risi Competizione’s 488, which they only had delivered a few days before the race, came in only a handful of laps behind the Corvettes. I smell a turbo rivalry brewing. The new BMW M6s also had mixed results. The #25 M6 finished in 5th place while the #100 M6 retired when a carbon brake rotor exploded and sent the car into the wall. As it turns out, braking from 180 mph down to 45 for many hours on end can overheat even the highest-end comonents.

The GTD class battle was fierce and unpredictable. Five Lamborghini Huracans entered the race and were completely untouchable on pace. However, a nighttime crash between two of the Huracans knocked the Paul Miller Racing Lambo from the race lead and the Konrad Motorsports Lambo ran out of fuel just two laps short of the finish while trying to stretch gas.

Magnus Racing, who made that sweet Lego video we showed you last week, came away with the GTD win when Audi factory ace Rene Rast somehow, someway squeezed every last drop and fume from the fuel tank to sputter across the finish line just a couple seconds ahead of Black Swan Racing’s charging Porsche. Rast ran away out of fuel on the cooldown lap and came in on the tow. Riley Motorsports’ Dodge Viper rounded out the class podium with a strong effort from the team’s second car just a few car lengths behind Black Swan.

Unhinged: Why Does It Seem Like Is FCA Giving Up On Making Cars? Jay Leno Takes Us On A Tour Of Not Just The Ford Mustang Shelby GT350R...But The GT350R That He Personally Bought!