The 1,000mph Model Kit – This Quick Video Tour Around The Components Of The Bloodhound SSC Is Pretty Awesome 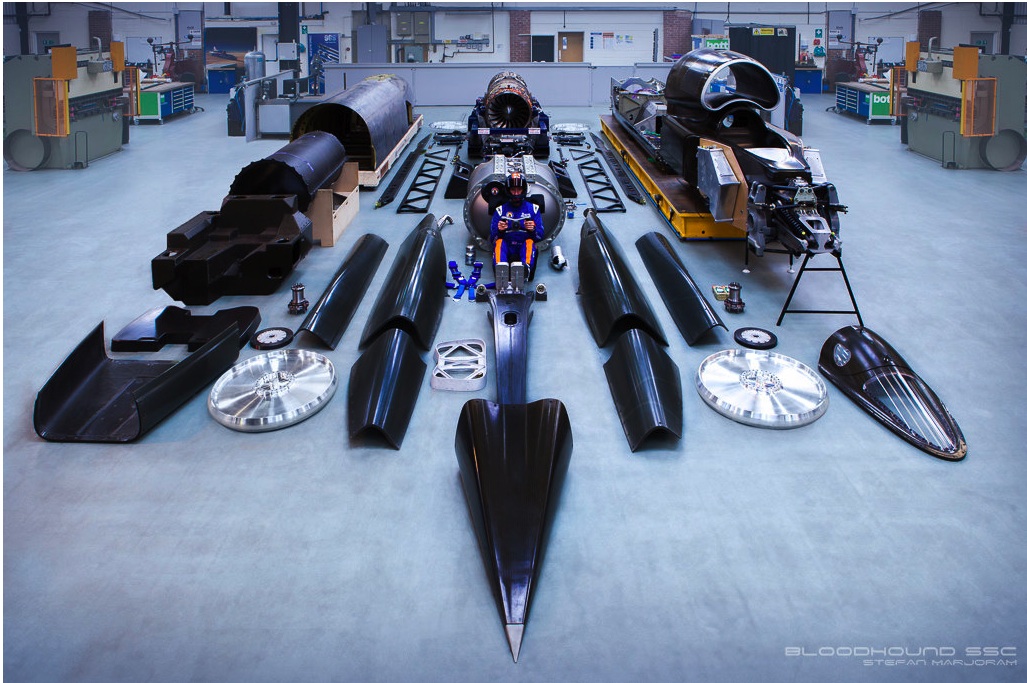 2015 is the year that the Bloodhound SSC is finally slated to turn its wheels and make big speed in the deserts of South Africa. It has been a pretty amazing thing to see this land based missile come together and it was even more interesting to see how the team, led by Richard Noble approached the project. Calling on the resources of the UK to keep the project as “in house” as possible and to stir national pride and interest the Bloodhound gang (see what we did there?) succeeded in creating a national movement to help this envelope shattering creation reach its ultimate goals. It would have been one thing to put the sale pitch on an oil company or whatever but that was not the tactic. Instead the car shows that the country still produces some pretty awesome stuff and it can all work in concert to achieve a goal that many people still don’t think is physically possible (people also thought driving more than like 60mph would cause you to suffocate).

Perhaps the coolest part of the car is that it uses piston engine power, turbine power, and rocket power all in interesting ways. The 550hp Jaguar engine spins a pump which fire hoses oxidizer into the rocket which will fire off after the car gets to a certain speed with the turbine engine providing thrust. Meanwhile, Andy Green will be in the cockpit wondering what the in bloody hell is going on behind him as the car screams toward 1,000mph. Think they’ll do it? Noble’s track record is damned good with this big scale stuff and they certainly have an amazing machine to attempt it with.

Take the tour below and see what we mean.

Here’s what the video description says:

The BLOODHOUND Supersonic Car kit contains over 3,500 components, many custom-made, including: a state-of-the-art Rolls-Royce EJ200 jet engine – normally found in the Eurofighter Typhoon; a cluster of Nammo hybrid rockets – developed to power the next generation of space launchers; a 550bhp Supercharged Jaguar V8 – used to pump the oxidiser into the rocket; two unique Rolex instruments specially made for BLOODHOUND SSC; a titanium skinned upper chassis; a carbon fibre monocoque and canopy with 50mm thick windscreen; plus 22,500 aerospace-grade rivets, each hand-fixed. Driver Andy Green and assembly instructions included.

One hundred and ten man-years have been invested in the design, build and manufacture of the BLOODHOUND Supersonic Car which is on track to challenge the Land Speed Record later this year in the Kalahari Desert, South Africa.

BLOODHOUND may be the world’s fastest racing car but going fast is not its main role; as the focal point of The BLOODHOUND Project, it is to inspire the next generation of scientists and engineers by showcasing these subjects in the most exciting way possible. Over 5,700 UK primary and secondary schools, and thousands more around the world, use BLOODHOUND materials in class in science clubs. Our aim is for every school child in the UK to enjoy at least one BLOODHOUND lesson or experience by the time the car reaches its ultimate Land Speed Record goal of 1000mph in 2016.

PRESS PLAY BELOW TO TAKE A TOUR OF THE 1,000MPH BLOODHOUND SSC MODEL KIT, COMPLETE WITH A LIFE SIZED ANDY GREEN!

BangShift Project Files: Not One, But Two Ford Truck Projects! A 427 In One, An EcoBoost Swap In The Other! Off-Roading Fail: Watch This Dodge Front-Flip Into A Mud Pit - Everyone Is OK

6 thoughts on “The 1,000mph Model Kit – This Quick Video Tour Around The Components Of The Bloodhound SSC Is Pretty Awesome”