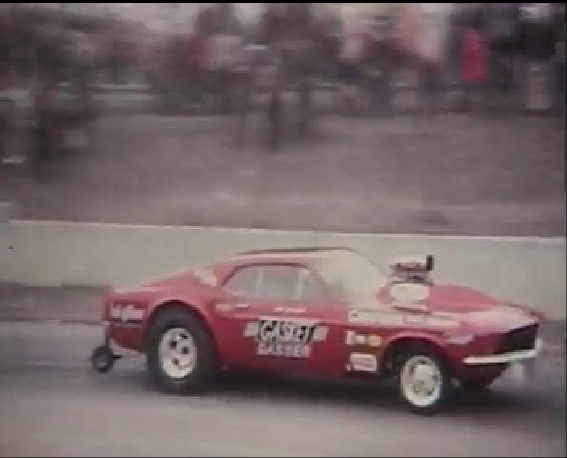 BangShifter Alain Jean gets all the credit for tipping us off to this flipping sweet 13-minute long collection of vintage drag race footage that was taken at tracks all over the place from Kil-Kare Raceway to Indianapolis Raceway Park at the US Nationals, to strips we cannot even identify. You will see some of the coolest cars of the late gasser era like Ohio George’s candy apple red Mustang sporting both the turbo engine in one part oft he video and the more traditional blown engine on the other. Ohio George is match racing Junior Thompson in his Opel during one portion of the video (at a place we cannot ID).

The footage taken during the big meets shows both action and pit scenes where you’ll get to gawk at both the cars and the drivers up close. In videos like this one, we’re never sure if the pit or racing stuff is cooler. On some level the pit stuff strikes us as the really neat part of the program because you get to see the drivers in their natural habitat, not strapped into a car. Then there are the haulers, of which you’ll see bunch. The video may mix years up some because of the different cars we see but that’s nothing that we’re complaining about. Seeing Bill Jenkins pop out of his ramp truck and talk to the crew is crazy neat as it seeing Ohio George tending to his Mustang.

One of the personal highlights for us came at about 6:40 into the film where Bob Glidden’s Pinto pro stocker is shown making runs and beating the pants off of the other guy. Having only seen photos of the short wheelbase car previously, it was really something to actually watch it run in competition. The car looks impossibly small but as we all know, that didn’t hurt Glidden at all. Totally awesome.

Press play  below to see this awesome drag racing video that was shot all over the country in the early 1970s!

6 thoughts on “This 13-Minute Collection Of Early 1970s Drag Racing Footage From Around The Country Is All-Time – Fuel Cars, Gassers, Pro Stock, More”