This 1500+hp, Twin Turbo 454 LSx Powered Toyota Mini-Van Is An Aussie Toyota We Can Totally Get Behind 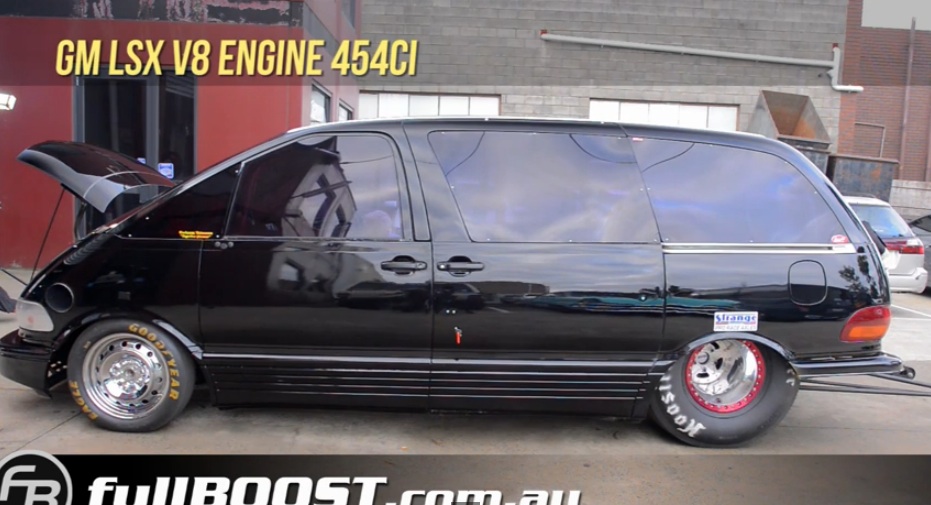 There’s an old expression that I like to use while announcing as a way to sum up a weird, different, or completely off the wall car. “If you are going to be a bear, you may as well be a grizzly.” The lunatics in Australia who have constructed this 1,500+hp Toyota mini-van which has some an Aussie name but was known in the USA as a Toyota Previa are the meanest bears in the woods! This thing is awesome and it is a follow up to another drag van they had and competed in a couple of years ago as shown by the beginning of this video. There’s a LOT of work into the van, which has a tube frame, a drastically relocated driver’s position, and a raft of speed parts the likes of which we see on few muscle cars, let along in a wrapping like you will see in the video below.

Because the van was just finished, there is no drag strip footage of it yet but that will change soon enough. We’re more than happy to see this Full Boost preview video which takes us for a very in-depth tour of the machine, highlights all of the hard parts you are wondering about and showcases the craftsmanship and thought that went into building this total strip freak. The body is obviously a production Toyota piece but after that, all bets are off.

We have always celebrated racers and builders that take the road less traveled. Having no clue as to what class this contraption will run in, we cannot say if it will be competitive or not but the fact remains that they’ve completed it, they are going to hammer on it and the van will surely be faster than anything we have had in the BangShift stable before or since! We do feel bad for the other competitors because each and every time this thing wins a round the guy who lost to it will be contemplating their choice in hobby.

4 thoughts on “This 1500+hp, Twin Turbo 454 LSx Powered Toyota Mini-Van Is An Aussie Toyota We Can Totally Get Behind”