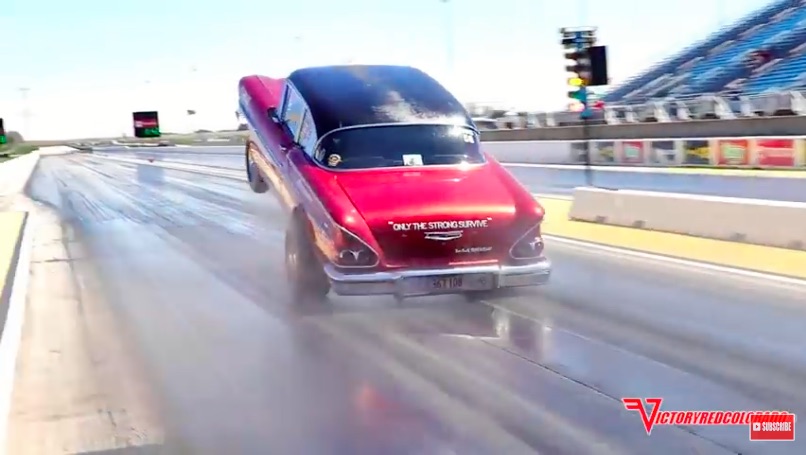 Few things are cooler in the sport of drag racing than cars which have been raced for generations by the same family. Such is the case here with a unique 1958 Chevy Bel Air that has been on drag strips for 40 years and possibly more. The name of the car is Daddy’s Thing is its lived around the Chicagoland area for the entirety of the life it has lead. Over the years the car has had a multitude of engines and drivetrain combos in it but the one that it packs now is the mot potent.

This thing is powered by a very healthy sounding 540ci big block Chevy topped with a tunnel ram and a pair of Holley carbs. The transmission is a trans-brake equipped Turbo 400 and the rear axle is an awesome Olds/Pontiac unit from the 1950s. Those Olds/Pontiac rear axles were the hot ticket for anyone racing anything for a long time.

We dig the paint, we dig the lettering, and we most of all dig the colorful history of the car that you’ll learn here. Clearly this thing is not designed to do what it does when making a run at Route 66 Raceway because the wheelie is very high and the landing is very hard. The tiny rear tires make this feat all the more impressive as well.

This car is about as BangShifty as they come and we think that you’ll dig this video.

On It: Ride Along In A Flying BMW M1 As It Absolutely Tears Around Spa In Belgium - Awesome! Old Caterpillar Video: This Introduction Film Of The Caterpillar 944 Wheel Loader From The 1950s Is Awesome