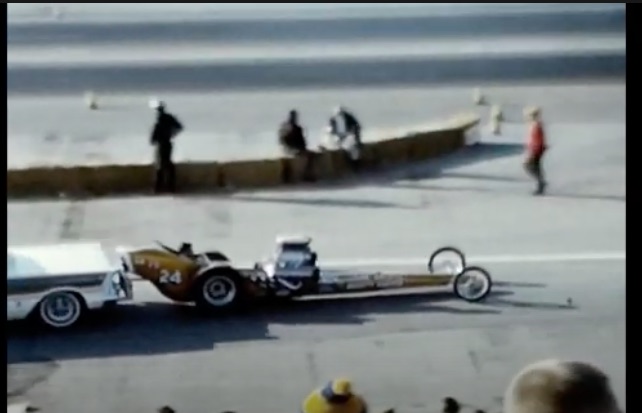 We have showed you film from the 1965 NHRA Winternationals before and told you the story of the race. As a quick reminder, this one was known as the “One Day Wonder” as days and days of rain had denied the start of the event until Sunday and the entire race was run in a single day. The cars were pounding down the track and all the biggest names were there.

The video you are going to see comes from a YouTube channel called Sour Schwinn. The guy who posted it was a baby at the time his pop brought the 8mm camera to Pomona and recorded his day from the stands. The films were found in a desk and he digitized them. This is some of the cleanest, most clear, and well shot 1960s amateur drag racing video we have ever seen.

You can clearly identify cars like the Sachs and Sons Mercury, Connie Kalitta in the Bounty Hunter dragster, KS Pittman, and the list goes on and on and on. What’s more is the fact that the top fuel final is shot from the top end and we can see Prudhomme blowing up the Hawaiian in the process of winning the event and launching one of the greatest careers in the history of the sport at the same time.

THIS is magic stuff.

Fantastic historic video: The 1965 NHRA Winternationals shot from the stands –

Don't Call It A Comeback: Rumors Running Wild About The Possible Return Of The Toyota MR2 - Porsche Involved? Good Sounds: This Video Features The Best Sounding Straight Eight Engines In The World