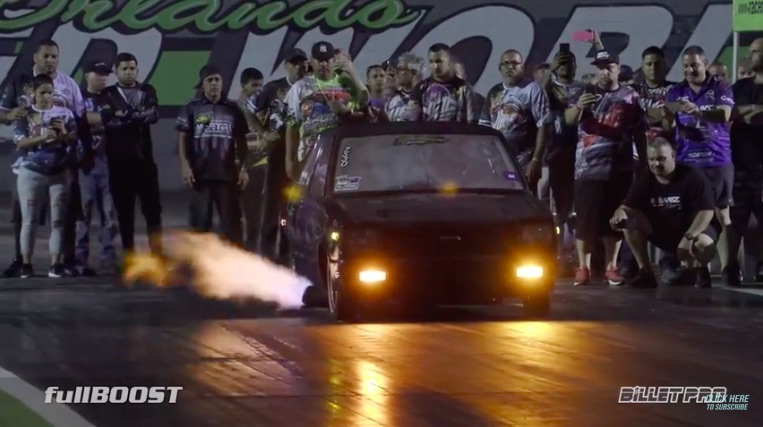 You may not be the biggest rotary engine fan in the world but if you watch this car and don’t immediately love it, there’s something wrong with you. A 1982 Startlet with an insanely worked 13b Rotary engine and a 91mm turbo hooked to a Liberty transmission is a six second bomb that can’t keep body panels on. Oh, and those 6-second runs came with a rookie driver at the car’s first event. This thing is mental.

Shown here at Orlando Speed World dragway, you’ll see the little car launch like a slingshot and then pull the wheels up, refuse to go straight at any point down the track, and cause the driver to be up on the wheel like a boss from end to end. Also, on virtually every run something flies off the car. Windows, the hood, we think a door at one point, it just did not want to keep itself together!

Drag racing is an incredible sport on many levels but cars like this one really set themselves apart. The amount of skill it takes to drive the thing, the amount of guts it takes to keep the hammer down, and the amount of work that went into building this flyweight beast is really something.

The Bollinqui racing team that fields the car should be proud because they have themselves one wild, wild machine.