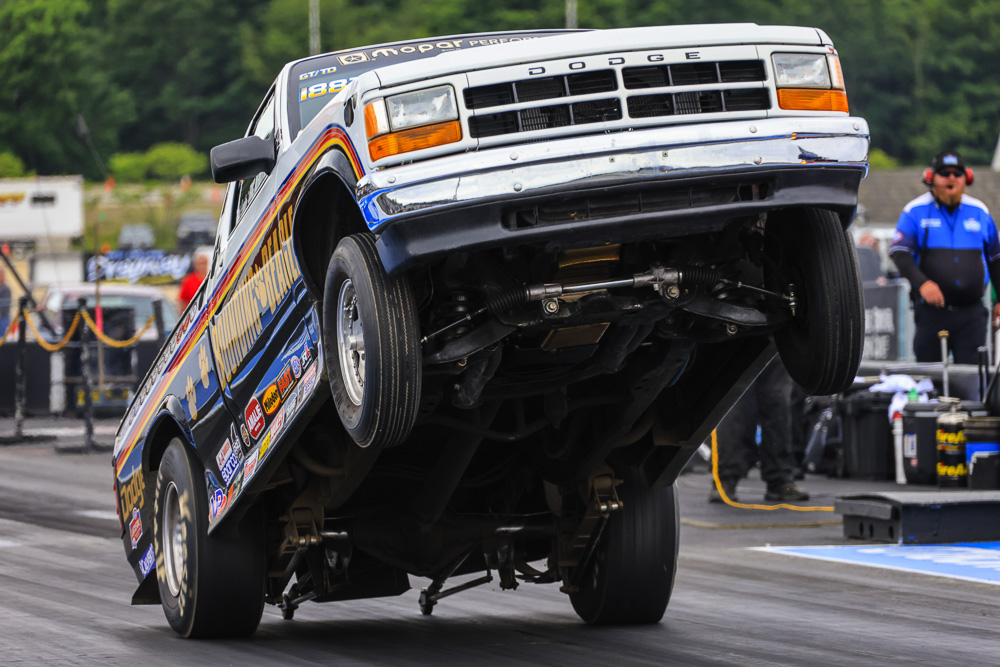 (Photos by Wes Allison) – The 2021 TascaParts.com NHRA New England Nationals presented by Bandero Premium Tequila was a fun time for the many thousands of fans that piled through the gates of New England Dragway in Epping, New Hampshire. The crowds were mondo-huge and the sportsman drag racing action featured loads of regional racers as well as competitors from as far away as Texas and Tennessee making the tow to the Granite State.

We have scads of photos from the event and we’re leading off the parade with images of sportsman cars leaving the starting line with the front ends up! Stockers and Super Stockers took full advantage of Epping’s tractive all-concrete surface and maybe none more so than Eric Merryfield from Amesbury, Massachusetts in his Bounding Beagle Dodge truck.

This thing was a fan favorite the entire weekend because it would leave with the bumper scraping the ground every time he hit the gas. Merryfield went rounds but ultimately could not close the deal in his super stock truck. Joe Santangelo Jr won the class and the Wally in Epping.

Enjoy these photos, we’ll be back with more tomorrow!

Level Up: Lexus Gets Serious About The Compact Crossover Market With All New NX Are You Feeling It: Ford's Grand Small Truck Experiment Is Officially Underway With The Maverick