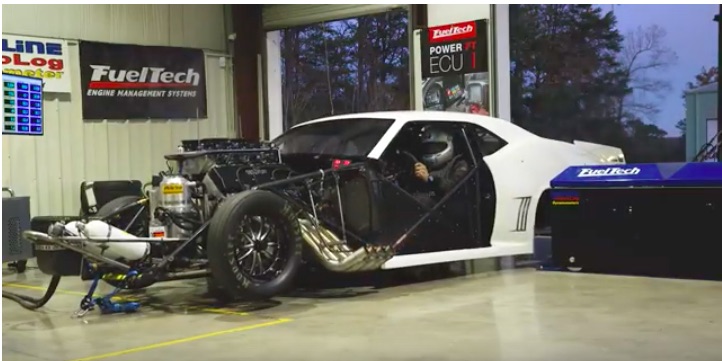 Things in hot rodding and racing sometimes comes in bounds and waves, right? It’s kind of like the aftermarket EFI world. There were a couple of companies offering products, and then a couple more, and then BOOM there was an aftermarket EFI industry that has all but exploded in racing and on the street. In this video we see the PDRA Pro Nitrous car of Chris Patrick. We hear it too. The car actually makes a run…sitting still.

Remember the whole thing about bounds and waves? The current one is the explosion popularity of hub dynamometers which are capable of “holding on” to amazingly powerful race cars, street cars, and even pulling tractors. Pulling this car on a traditional chassis dyno would be dangerous and insane. The amount of potential disaster is off the charts. With the hub dyno, the tires are removed and the car is physically bolted to the machine. If there was some sort of a failure, the thing would freewheel. God forbid the car actually falls off of it, it does not have two giant spinning tires to launch if across the shop.

We are not given specific power numbers here but in talking to guys who compete in the series and who run with huge 959ci engine that have similar setups as Patrick, the power levels are well in excess of 3,000. These guys fire four and five kits of nitrous at these cars and managing that power as the nitrous cannons come in like Thor’s hammer time and time again. A hub dyno like this can give some real awesome feedback to tuners and engine builders, as well as drivers, on how to properly run the car for max performance on all levels.

Oh and pay attention to the front end of this thing, when you see it come off the ground you’ll know how serious it is!

Press play below to see this restrained beast roar on the floor!