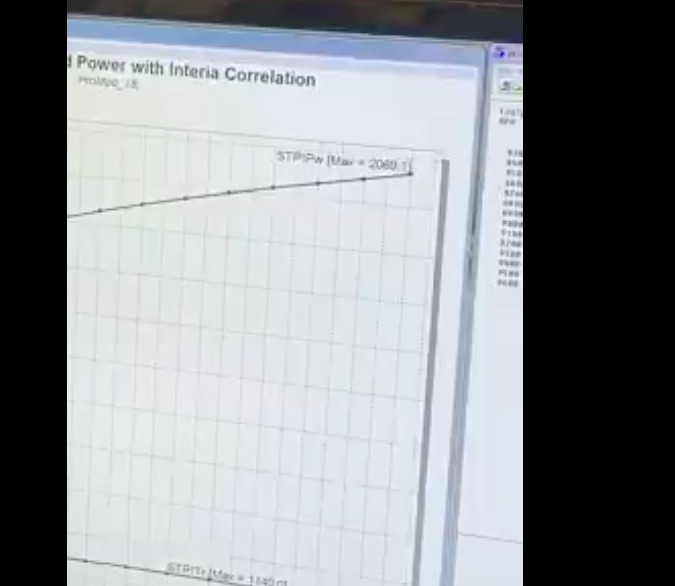 Chris Holbrook is known far and wide in drag racing circles as a guy who can build basically any combo of engine into a beastly class mangler. I have personally seen his work in a multitude of drag racing categories from mountain motor pro stock to the Factory Stock Showdown over the years and the guy simply does not relent when it comes to making horsepower and this video serve as further proof. Recently, Holbrook sold his Mustang Cobra Jet that was about the nastiest one in the country to concentrate on some new projects. It seems as though he is getting ready to unleash a massive can of Coyote powered whoop-ass on the NMCA pro modified scene because, well stay tuned.

So this video shows a 315ci Coyote engine on the dyno at the Holbrook Racing Engines shop. It is topped with a 3.8L Whipple supercharger and while we cannot see the tach, you are going to hear this engine pull to right about 10,000 RPM and in the process, it makes some 2,069hp and was still pulling when the dyno rip stopped. Pretty incredible, right? He’s just getting started.

This engine was built as a test mule to allow for some R&D ahead of assembling an all-billet 373ci engine which we have to believe will be plugged into a tube chassis and entered into NMCA pro mod racing action. The small increase in cubic inches may not seem like much but it will be the larger engine with we’re guessing more blower on it that will really turn some heads.

Remember, MMR is already a stout competitor in NMCA action with their Coyote powered cars. Their Mustangs use turbos though. This is shag-nasty!

Press play below to see this 315ci Coyote engine make some 2,000+horsepower!

NHRA Insider Podcast: The Funny Car Strongman And Some Big 2020 Numbers The Desert Truck Of Your Mopar Dreams: This Dodge Bodied Class 8 Baja Truck Is Nearly Done - Unique And Awesome!