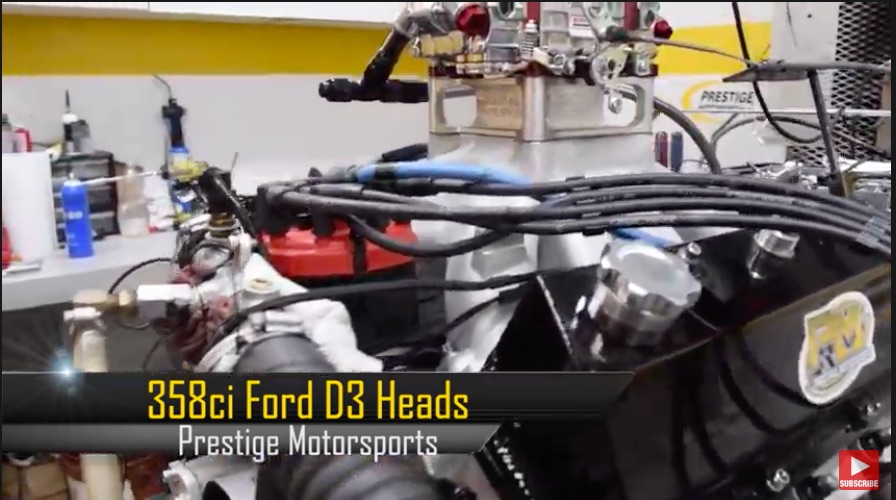 By the time the early 2000s rolled around, Ford had a horsepower problem in NASCAR the C3 head that they were using was OK but it was definitely not up to the job of hanging with the other manufacturers on the track and that’s when the D3 was developed and the D3 was one of the major reasons that Ford won the 2005 championship. These things were allowing top flite NASCAR engines to make some 840hp naturally aspirated without restrictor plates. Remember, this are 358ci and they are naturally aspirated. Capable of flowing more than 400 CFM, these are bad daddies and they are not cheap with bare single heads retailing for more then $3,000 a piece.

In this video from Prestige Motorposrts we see a 358ci Ford small block make 730+ horsepower at 8,000 RPM. The angry little engine is haded for the nose of a Panz sports car which should make it into a truly high speed terror or a really fast coffin for whoever is driving it. This is a really awesome engine.

Watch the sweep of the RPM needle as well as the horsepower needle as both are monitored on the screen during the dyno pull.

If you love Ford horsepower, this one will have you smiling!

Unknown Parts Counter Guy: Hold On, Sir, I Have The Engineering Blueprints In The Back The Hyundai RM20e Is The Ultra-High Performance Electric Hatchback Of Your Dreams (Or Nightmares)

One thought on “Ripsaw: This Little 358ci Ford Small Block Has Yates D3 Heads And Makes 730hp NA On The Dyno – Watch!”