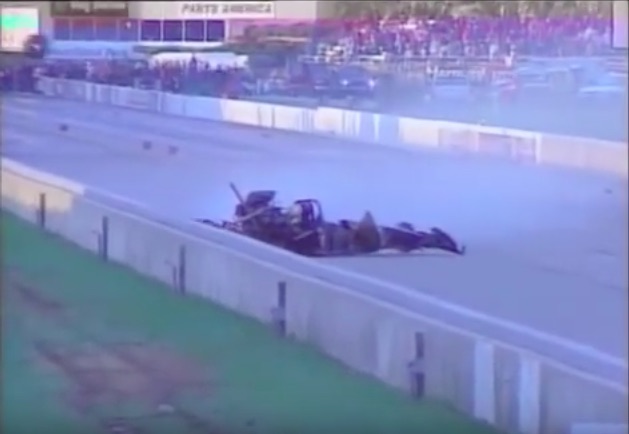 Pat Dakin has been involved in the world of top fuel racing since the 1970s. In fact, many people forget that it was Dakin who chased Shirley Muldowney right down to the wire during the 1977 NHRA season when she won her first national championship. Dakin was second that year. Although Pat picks his spots these days and is not a full time player on the tour, the reality is that he has a good, sensibly run car that can and does run competitive numbers against some of the biggest names in the sport. This is something that has been a constant for Dakin over the ears and the proof of just how potent his cars can be was on full display for the fans at Heartland Park Topeka when Dakin suffered a massive and hyper-violent blow over on his way down the track.

This one is particularly creepy for a couple of reasons. The first is tires. You are going to see all four of them come off he car at various points in this calamity and the rear ones are still actively bouncing and rolling all over the track when the destroyed chassis of Dakin’s machine finally slides to a rest on the Topeka drag strip. The good news is that there’s  a wide gulf between the fans in the main grandstand and the track so that bouncing tire had a LONG way to go to get to people.

The second reason is the fact that the car flies long and high and then lands directly on the wall. Pat was injured in the car but not in any sort of life-threatening way. His hands were messed up and he was beaten to the core because of the violence of the wreck but he was taken to a local care center, treated and released. This one ended his 1998 season and set the single car team back a while because their only steed was completely and utterly destroyed. Tough stuff.

The top fuel blow over is largely a thing of the past and that is a good development in our eyes. These things are spectacular to watch but you never want to see someone get hurt or their property get completely and utterly leveled. Oh, and by the way. Pat’s skipping Topeka this year. This is not really an anniversary we’re thinking he wants to celebrate.

Insanity: In '62 Chevy Sent A Group Of Corvairs And Trucks Through The South American Jungle - This Is Incredible Video Money No Object: Can You Put A Price On Nostalgia? If This 1963 Tonka Truck Is Any Indication, Yes You Can!