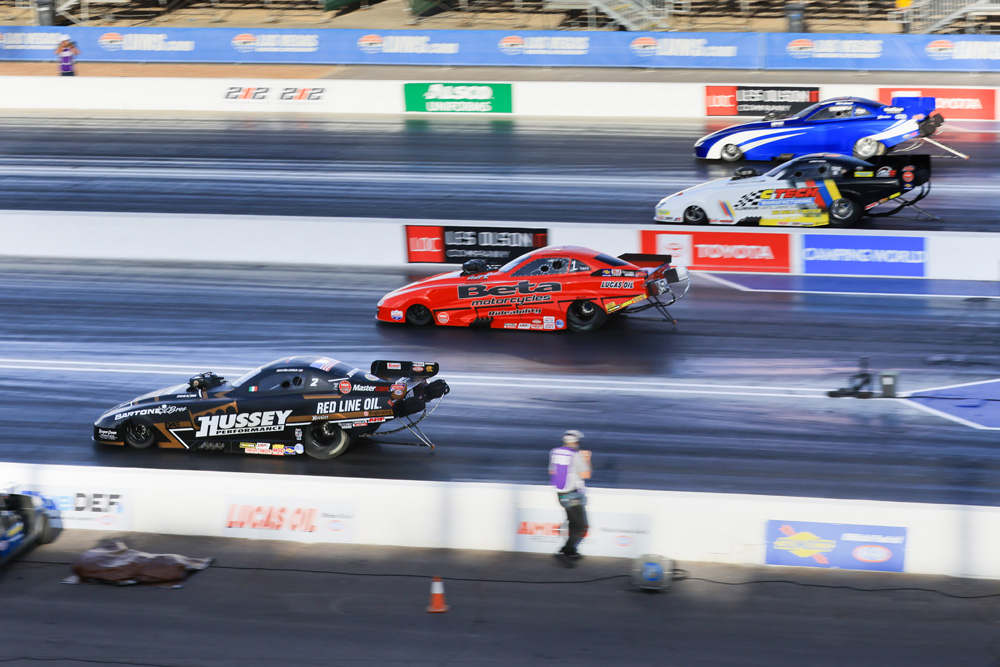 (Photos by Wes Allison) – It is always a treat to see something new for the first time ever and that was the case for fans at Las Vegas in the stands watching the Denso Spark Plugs 4-Wide Nationals. They got to see top alcohol funny car and dragster run four wide for the first time in history. Shawn Cowie and Doug Gordon were the guys who got the job done. Cowie did it with a series of low 5.20s through eliminations and qualifying while Gordon won a dramatic final round by pedaling and bouncing his way to victory. It was a unique and cool spectacle that looks to be repeated on the east coast with the Charlotte four wide race coming up in a few weeks.

Whenever we see race drivers taken out of their comfort zone, things get really interesting. These people have trained or have been trained to do one thing and do it really well. Small divergences from that routine are what often will throw us humans for a loop and in drag racing, four wide action is that thing. We saw people leaving early, not leaving at all, or simply getting lost in the staging process over this weekend. It was an adventure and one that looked and sounded amazing.

Cross Country Road Trip In The World's Largest Square Body With Finnegan. And Boats. Yep, More Boats. The Big Block K5 Swap Is On! The 187 Customs Crew Is On It. "Is the Drain Plug In It?"

One thought on “2021 Denso Spark Plugs 4-Wide Nationals: Alcohol Dragster and Funny Cars Four Wide For The First Time Ever”