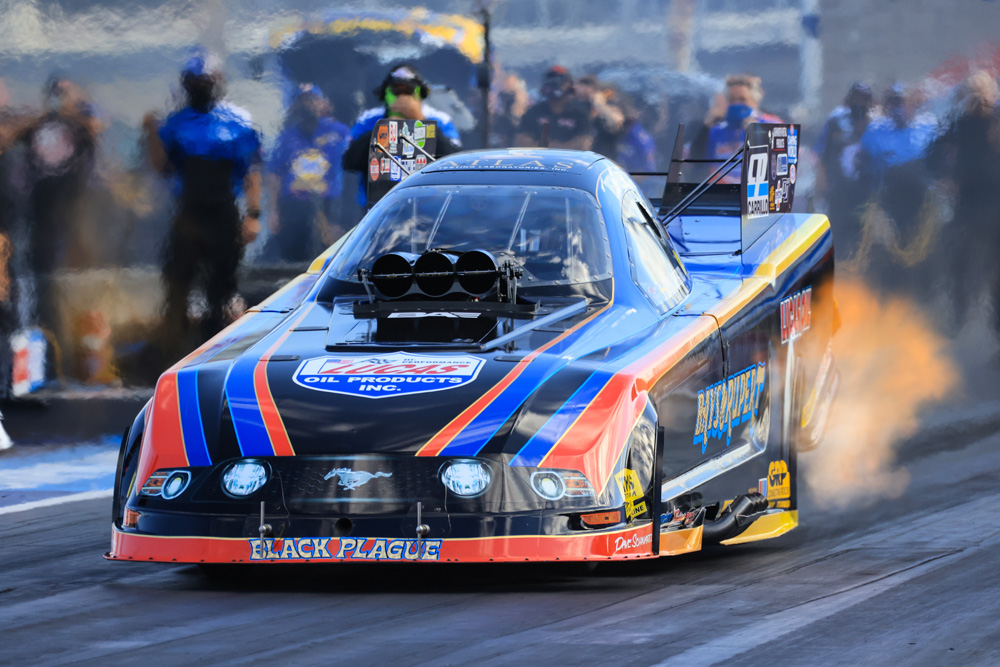 (Photos by Wes Allison) – There was a lot of neat stuff happening in the nitro funny car category at the Denso Spark Plugs NHRA 4-Wide Nationals in Las Vegas. 19 cars were there to qualify and a load of them were independent west coast teams. Chris Morel, Alex Miladinovich, Jason Rupert, Steven Densham, and the list goes on and on. Those cars put on a good display and a good effort with Rupert’s car (being driven by Jonnie Lindberg) made the show and competed on Sunday. Jason then drove it on Monday to a 4.05 second clocking to earn his license. We’ll see those boys again once the tour turns west in a few races.

Bob Tasca III won the event and did so in the presence of his dad. It was the first race his father attended since battling and beating Covid. That team has long wanted and long worked to be a championship level effort and it sure seems like they have gotten their feet under them. It was also fitting to win the race on the 57th birthday weekend of the Ford Mustang. The executives in Dearborn were happy and perhaps that’s the best news of all for Ford funny car fans.

Enjoy these images from the event. This weekend the 40th and final NHRA Southern Nationals happen at Atlanta Dragway. If you want to see the last one…BE THERE!

Hit the images below to expand them and then scroll on to see them all – nitro rules!

Video: OPGI Does B-O-P Better Than Anyone In The Industry - Check Out These Tricky To Find Buick, Olds, and Pontiac Parts Freaky Flight: Watch Joey Logano Take Flight At Talladega From Every Angle Including Insane In-Car Video