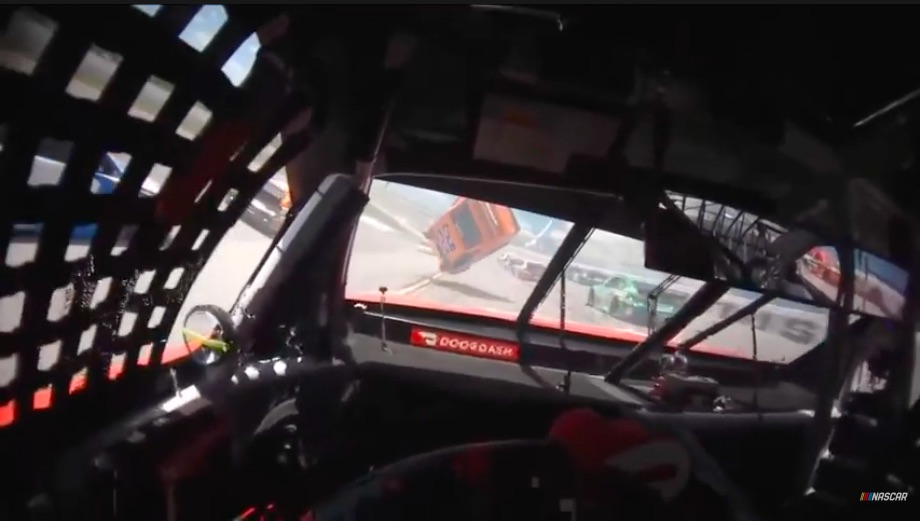 If there is one thing that NASCAR has tried to stop vehemently over the last several years, it’s cars taking flight at super speedway races. If there is one thing that they keep learning it is that no matter the number of flaps, devices, and measures they put in place, physics always wins. No place was that more shockingly clear was at Talladega yesterday when Joey Logano was turned sideways and ultimately backwards at speed and his car took off like a dry leaf on a windy day. Logano walked away from this and gave a pretty great post-wreck interview but before the post-wreck, there was the actual wreck and boy was is a wild one. No one knows that better than Bubba Wallace.

As you will see from this NASCAR on FOX video which covers the calamity from just about every possible angle, the split second reflexes of many drivers kept it from being worse than it could have been and in the case of Wallace, Logano’s flight path saved his bacon. Mike Joy, Clint Bowyer, and Jeff Gordon are on the call here and their incredulous reactions are fully warranted here. Bowyer’s line about needed DoorDash to bring him some new underwear is pretty funny as well.

There are some serious questions to ask here, right? What happens if Wallace piles into Logano at 199mph? What happens if Logano’s car lands in a manner that basically sends parts of it through the windshield of the Wallace car? We’re not smart enough to sit here and make suggestions to fix it but one bad bounce in this car could have changed this from a wide-eyed viewing experience to a legit tragedy.

Press play below to see this incredible coverage of Joey Logano’s Talladega flight!

One thought on “Freaky Flight: Watch Joey Logano Take Flight At Talladega From Every Angle Including Insane In-Car Video”