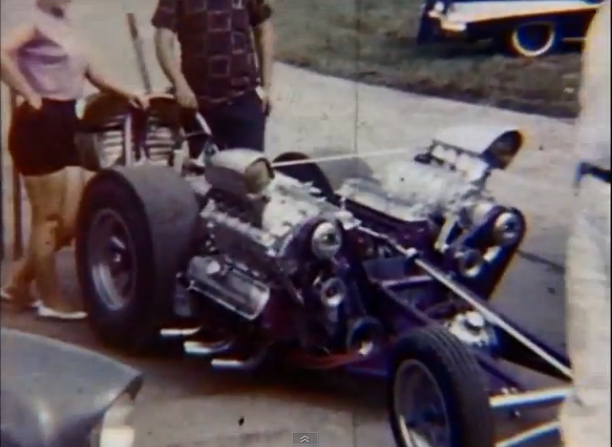 About a week from now, I’ll be on the way to Indianapolis for my favorite NHRA drag race of the year, the Chevrolet Performance US Nationals. There’s nothing like it and there has been nothing like it since its first running in 1955. A grueling test of driver ability and mechanical prowess, winning Indy remains drag racing’s greatest singular accomplishment. Because of my excitement, I have already been hunting up cool videos.

This is some amazing footage from the 1962 NHRA Winternationals that captures action on the track as well as some totally fantastic stuff from the pits like Don Garlits and Mickey Thompson deep in conversation, Dyno Don hanging out with his new Chevrolet Impala, Dave Strickler also with his Chevrolet, and many more scenes of wonder. Then there’s the cars! Twin engine dragsters, altereds, and front motor dragsters dominate the video with some excellent stock eliminator action as well. You’ll see an Ace Wilson tuned “Royal” Pontiac (maybe driven by Jim Wangers?)

The 1962 running of the NHRA US Nationals was a shortened affair with rain cutting into the racing action. Winners included guys like Hayden Profitt and Jack Chrisman. Chrisman was driving a Pontiac powered Mickey Thompson owned dragster and he had to face down pretty much every hard running dragster in the USA to come out the winner. This was an awesome car. It had an aluminum block Pontiac engine in it which was an experimental piece that measured over 430i, it had his hemi Pontiac heads on it, and it ran in the high eights with Chrisman taking down Garlits in the final for the title of Mr Eliminator. Know what he won?

He won a 413 engine from Chrysler dealers, a Honda 110 motorcycle, and a trophy. We could go on all day about this race and how cool it was but we’re going to let you watch the short film below and get a sense of just what it was like when 1,000 cars showed up in Indy and ran their brains out for days on end.

This year nearly the same number will be running for their lives own the strip at Lucas Oil Raceway and it will again be the best in the nation all gathering for one event that helps define the history of the NHRA.

Bonneville Speed Week 2017: We've Been Off The Salt For A Week But The Photo Flow Keeps On Rolling This 1966 Chevrolet Beaumont, AKA Canadian Chevelle, Is Awesome And We Want It!