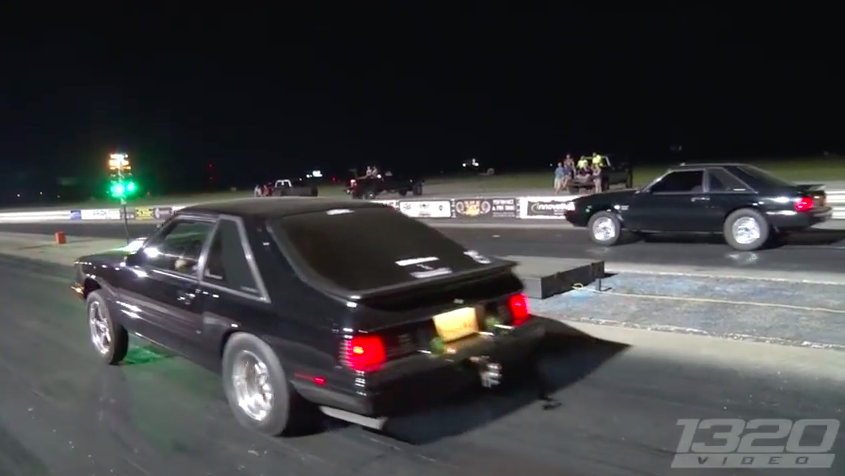 Our pal John Puckett is a drag racing fool. We mean that in the best of ways of course but we see him at Drag Week and we love catching videos of his car because it is a stout piece that has the correct numbers of pedals…three! Puckett is the driver of a Fox Body Mercury Capri powered by a Vortech YSI blown Coyote engine on 18psi of boost. The car has a T56 transmission and a set of nice little DOT cheater slicks that get abused like few tires have ever seen.

The guys from 1320Video caught up with Puckett recently when he was running an event held at I29 Dragway in Iowa. Entered in the stick shift class, he was among his own people and as you can tell by the interview at the beginning of the video, he’s kind of excited to be amongst guys who would all be shifting their own gears. As you will see in the elimination rounds, he had a right to be excited. The car is just flat ass nasty and it works so good. The reason it works is no accident. John has put in the effort to both set the car up properly and drive it like it needs to be driven which by the looks of this video is violently!

Like all stick cars, our favorite part to watch is the leave. To say that Puckett is aggressive would be the understatement of the decade. He literally puts this thing on the chip at an ungodly rpm and just steps off the clutch like he allergic to it. Yes the car makes some wheel speed and turns the tire but it does so the same way every time and that’s kind of the magic. Dead hooking the tire will cause problems in the fact that he’d bog the engine, maybe break driveline parts, and give up some speed and some elapsed time. He’s bringing the heat on every freaking run and the car seems to love it.

We dig this video because you see runs from inside the cars and outside the cars as well. The final is pretty awesome as are all of the elimination passes. This car is awesome and yes, 100% BangShift approved!

Hot Rod Garage Gets Back To Work On Bringing The Project X 1957 Chevrolet Back To It's Roots! BangShift Project Files: 1,000+ Horsepower Out Of A 355ci Small-Block Chevy In A First-Gen Mazda RX-7?