Rocket Revival: 2014 Looks Like The Year Hydrogen Peroxide Rockets Will Return To US Strips In Force 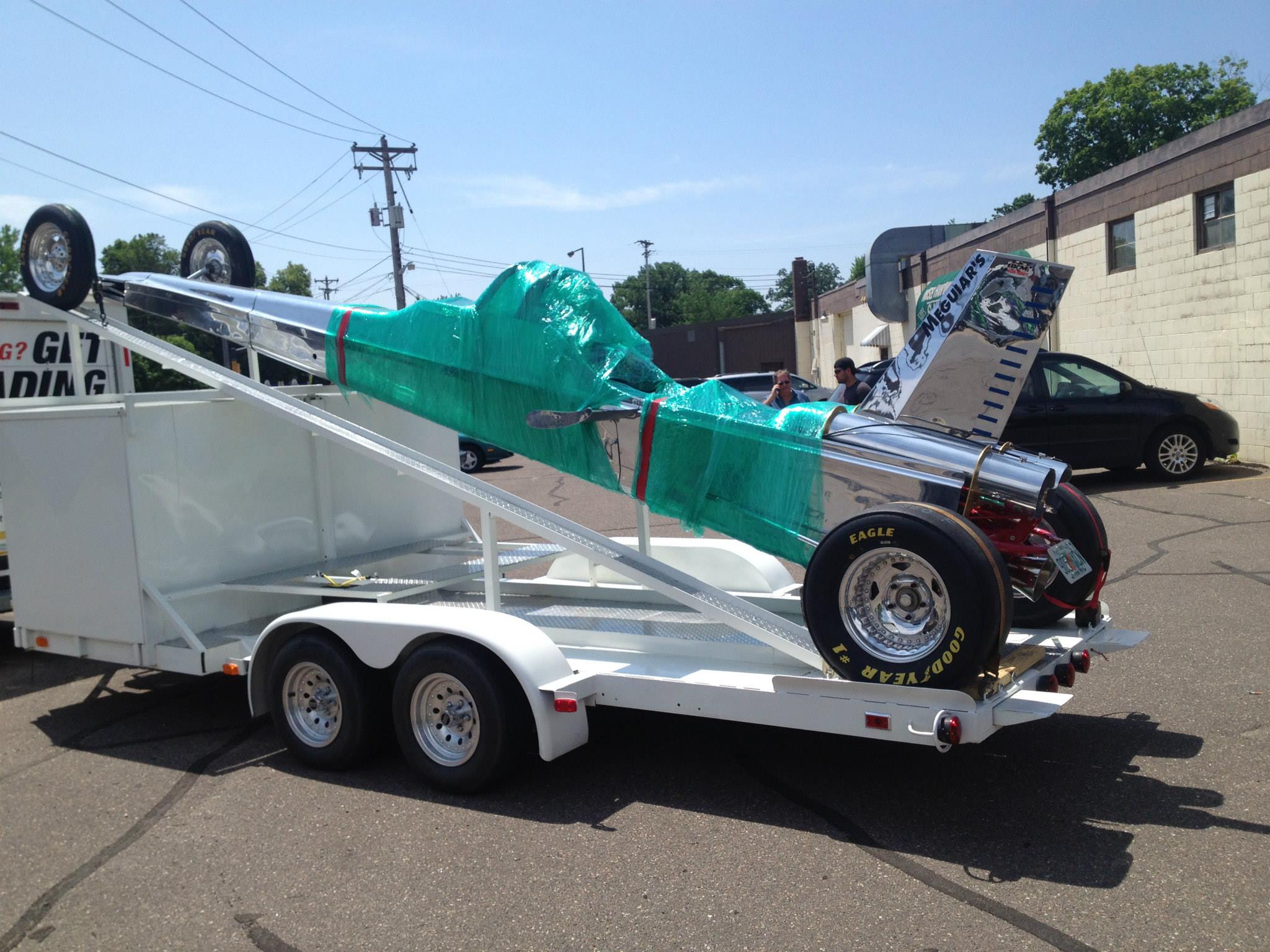 Maybe we can mark November of 2013 as the rough date that the revival of hydrogen peroxide rocket vehicles on drag strips began. It was in November that the noted French rocket motorcycle rider Eric Teboul made his historic 5.12/264mph run at Bradenton Motorsports Park in Florida. The reaction to the run was electric. People freaked out. It was the first time since the 1980s that the words hydrogen peroxide rocket were on the tongues of drag racing fans in North America. Teboul and others have been plying the rocket trade across the pond for years, but when accessibility to high grade and pure hydrogen peroxide for reasonable prices dried up here, so did the touring rocket cars. Contrary to what you may have been told or read, rocket cars, dragsters, and funnies were not banned. The fact is, the fuel supply become astronomically expensive and hard to get so the cars went away. Simple economics stopped the rocket cars, not a drag racing executive with a pen. Then Teboul came along…. 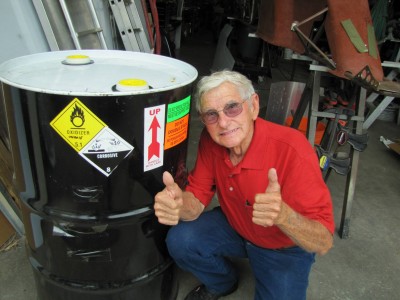 The reality is that this revival has been going on longer than that. Kurt Anderson and Captain Jack McClure didn’t start down their respective trips to rocket drag land a couple of month ago. Both men have been on their quest for a couple of years. In McClure’s case it was tracking down his famous rocket go kart and then purchasing the piece, getting it to rocket genius Ky Michaelson and then making plans to run it again. There were two obstacles in McClure’s plan. The first was that he had no fuel. That has been handled and he’s personally informed us that he’s got at least a drum of the good stuff. The second thing was finding tracks that would allow an 80 year old man to race a go kart that runs more than 200mph through the timing traps. That has been handled as well. We don’t know the dates or the tracks yet, but Jack told us with 100% certainty that he will be running multiple dates with his famous rocket go cart. Take that to the bank. The words literally came right out of his mouth and he’s not one to feed us bad info.

Lo and behold, there’s another car that is also planning to be out on strips in 2014. It too has a fuel supply, a match race plan, and the car exists. This isn’t vaporware. Kurt Anderson is the owner 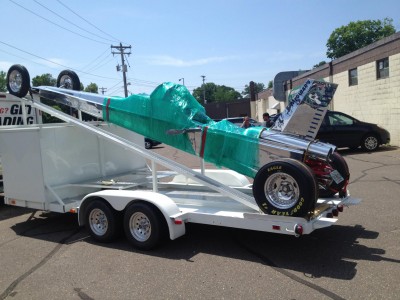 of the rocket dragster shown below. Through some digging we’re pretty sure we have seen his supply of peroxide and we’ll just say that he’s got enough to run that car for a good long time. The car is going to be inspected by a divisional chassis inspector, hopefully given a clean bill of health, and Anderson will be able to get it onto tracks for fans experience the most violently accelerating vehicles in the history of the sport. Rocket cars are incredibly light, very simple (in comparison to a piston engine) and have a power to weight ratio that is upside down by a long, long way.

Anderson’s car is a really nice piece and has been upgraded with carbon fiber brakes and other pieces to make the woah process match up to the go process. We’d have to think that Anderson would have a pretty hot commodity on his hands with this car as an exhibition machine because, well, he’ll have the only freaking one in North America when he hits the track with it. Having never seen one of these creations move in anger, we’d honestly make plans to get wherever we could to see it happen. Rocket cars thrilled hundreds of thousands of fans in the 1970s and into the early 1980s, there were some high profile deaths in the cars, but honestly they were (and are) no more dangerous than any other very fast drag race car. In some sense they may actually be MORE safe because there is no chance of a “stuck throttle” incident. Rocket cars carry enough fuel to get the job done and that is it. Typically the cars are out of fuel and coasting by the time they reach the finish line. As we have told you a million times before, Sammy Miller ran his rocket funny car into the 3s (quarter mile) in the early 1980s over at Santa Pod. This dragster could be capable of similar performances, although we’re going to guess that the NHRA may impose some sort of “speed limit” on rockets if they begin to proliferate. Many exhibition vehicles have so-called speed limits. The giant jet semi-trucks for instance have a limit of 215mph and the racers get in trouble for violating that during an appearance at a sanctioned track. 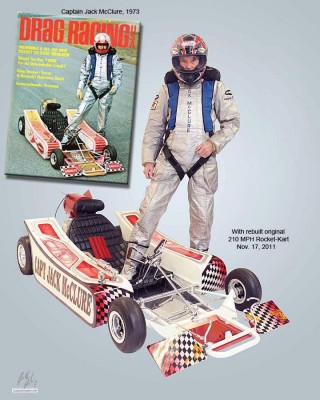 We’re going to closely follow both McClure and Anderson on their quests to reintroduce the American drag racing realm to the wonders of hydrogen peroxide rocket vehicles. The Michaelson family is tied into both of these projects and that is pretty cool because Ky had his hands in many of the rocket cars that ran during their heyday. You know all about the go kart because we wrote and ran the most detailed account of Jack McClure’s awesome life that has ever been done (you can read it here). As we mentioned above, Jack promised to keep us in the loop about the when’s and where’s of his 2014 “peroxide tour”.

We’re going to catch up with Kurt Anderson sometime soon and get the scoop on his car, on his motivations, and what has so inspired his efforts to get this car ready and running. The “Sonic Stinger” should be a real hit once word gets out that it’ll be touring around. We think it will pull longtime drag racing fans back to the strip and it’ll absolutely screw with the minds of people who have not seen a rocket car before. Look for more information and follow up with Kurt Anderson right here on BangShift soon. In the meanwhile, scroll down to see more photos of the Sonic Stinger this thing is completely awesome. 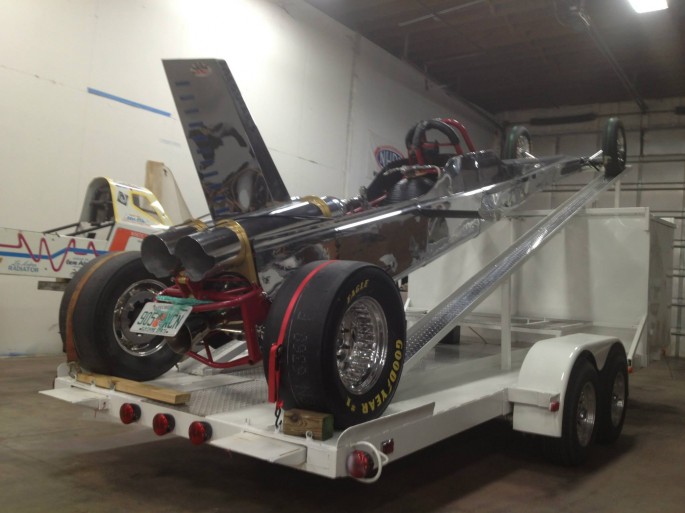 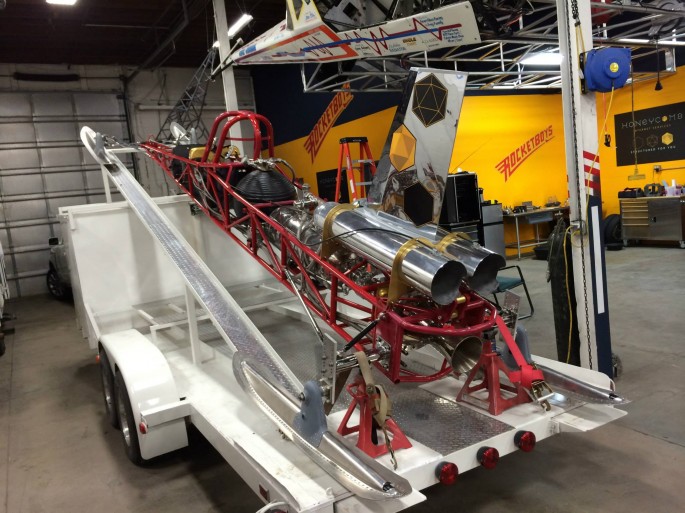 Dig this….the dragster on skiis! Not sure if the guys ran it on a frozen lake or what, but it looks nasty! 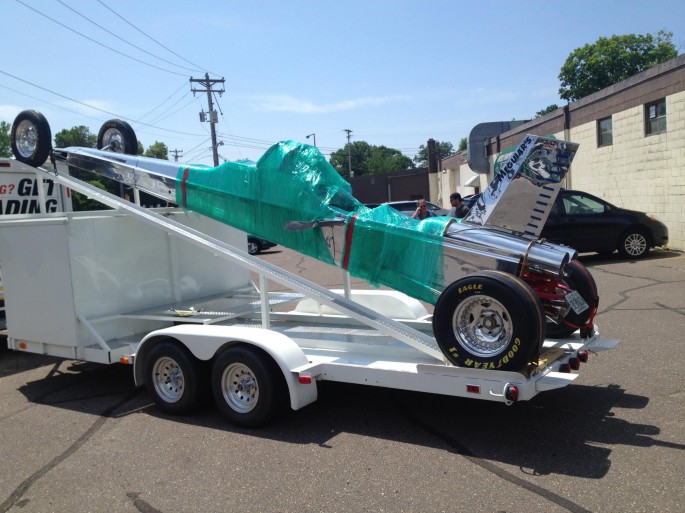 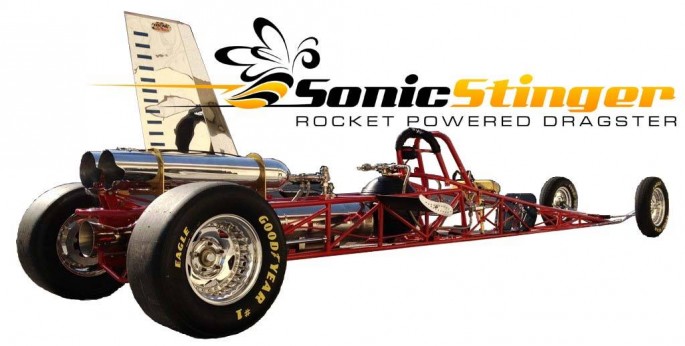 21 thoughts on “Rocket Revival: 2014 Looks Like The Year Hydrogen Peroxide Rockets Will Return To US Strips In Force”