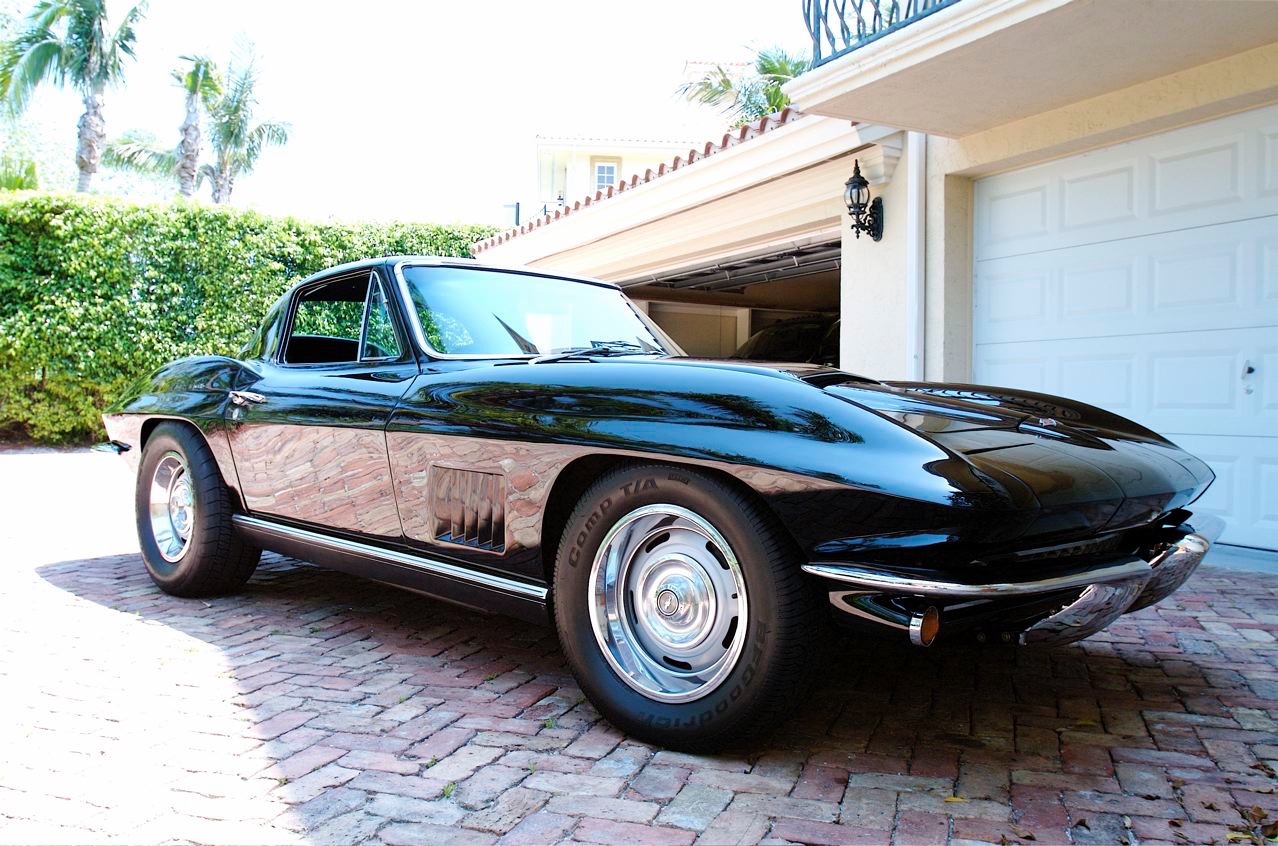 I’m in love with Doug Miller’s sleeper 1967 Corvette. First off it is a gorgeous example of a mid year Corvette, that has been “restored” to look stunning, but with all the right drag racer tricks to make it haul ass. And done in such a way that even the Members Only wearing , gold chain Corvette freaks can’t bitch about what has been done to it. Perfection. And it was built this way on purpose. In fact, whoever bought the car new was a hot rodder as well, because all it had was a 300 hp 327 under the hood, and almost no other options. We dig it because Doug still has the original engine, but it’s no longer sitting between the fenders. But we’re getting ahead of ourselves.

“I have had a lot of people (including the Covette purists) tell me how well this car turned out.” says Doug “I bought it in 1999, built it from 2000 to 2002 with help from Craig Priest of The Vette Smith in Perrine Florida, and with 5000 miles on it, I’m not wearing it out, yet.”

“I still love to look at this car every time I walk into the garage.” 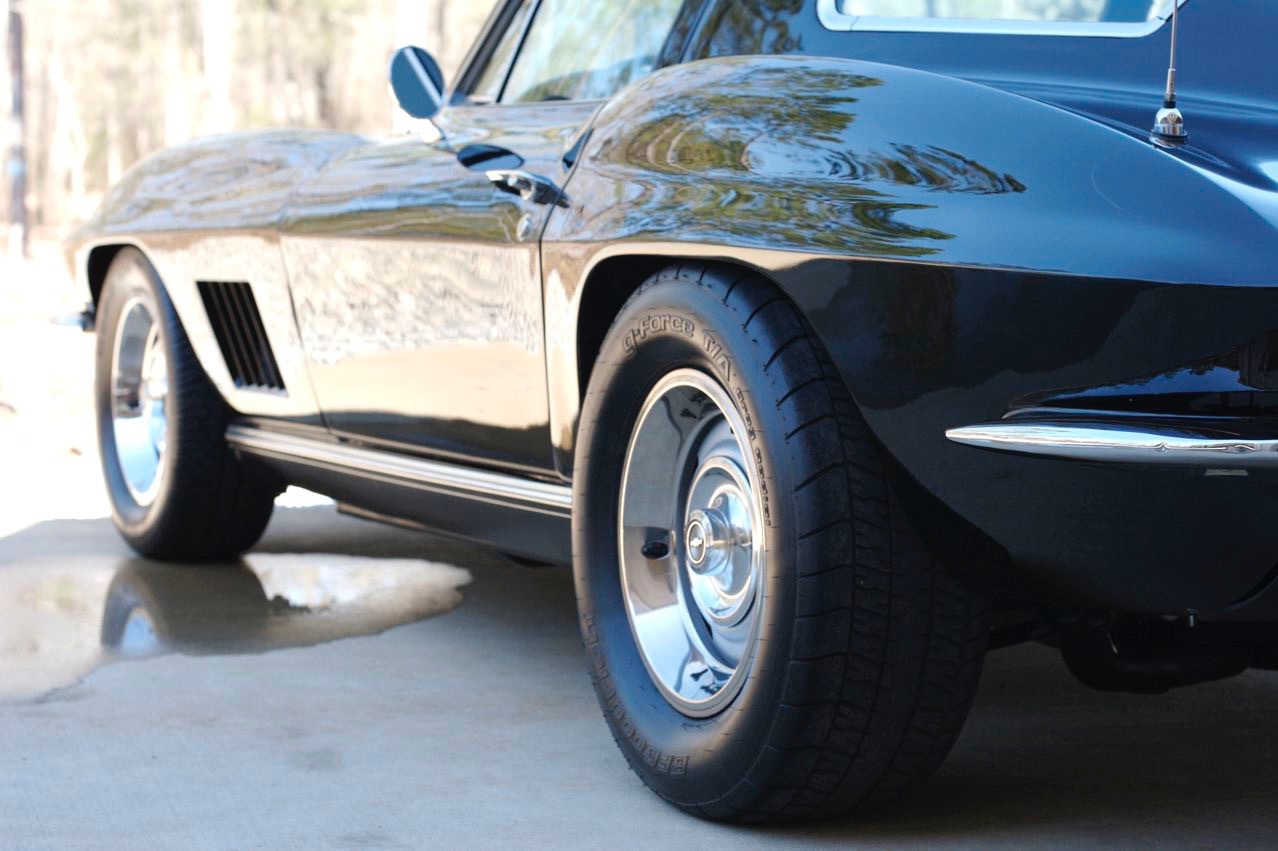 As mentioned before, it started life as a 300 horse 327 car, and that original engine is still sitting in Doug’s garage. In it’s place is an American Speed Enterprises 383 cubic inch Small Block Chevrolet featuring 6 inch SCAT connecting rods, SCAT forged crankshaft, and a Milodon road race oiling system.  A Comp Cams hydraulic roller is the brains behind the Comp Cams valvetrain, and AFR cylinder heads get the air in via a custom EFI manifold by Force Fuel Injection in Miami, Florida. It’s all controlled by a FAST ecu. Burnt gasses are expelled by Hooker Super Competition Ceramic Coated Headers, and they run into a custom bent 2.5 inch exhaust system. A Griffin aluminum radiator keeps it all cool. 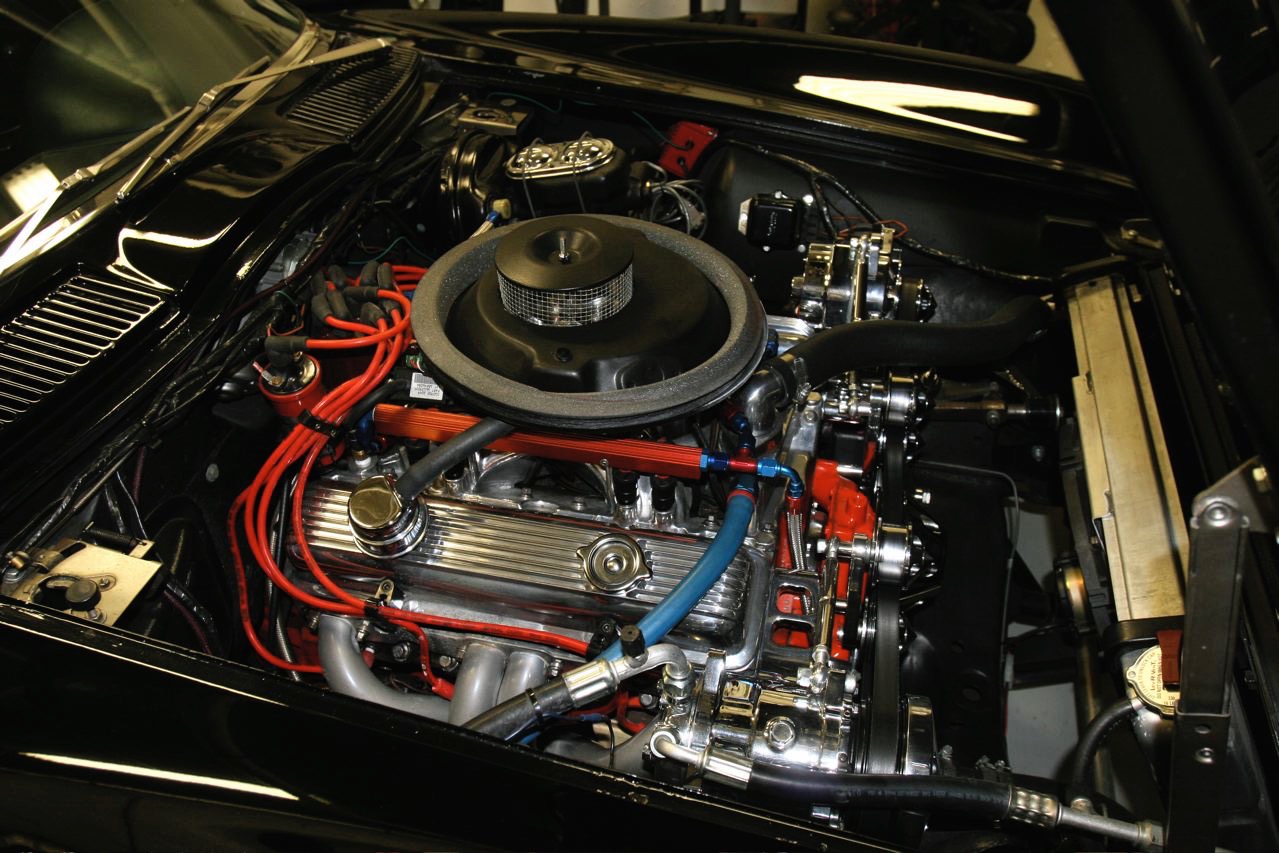 “I put a L88 hood and cowl package on and had to offset the air cleaner base to compensate for the small block’s dimensions.” says Doug. It’s a look we can get behind, especially since this small block has more power than the available big blocks of the day.

Power is sent through a Centerforce clutch, and then to a Richmond 5-speed trans. “I love the gear whine, it’s reminiscent of an M22.” We can’t argue with that Doug. The rear has a 3.08 gear, and the half shafts are all big block parts, and there is some frame gusseting going on underneath that helps with rigidity but won’t grab your attention by looking out of place.

For suspension, Doug and Craig called upon Vette Brake Products, as well as a rack and pinion steering kit from Steeroids. Wilwood aluminum calipers grab hold of drilled and slotted rotors to stop this beast right now.

Creature comforts include a Custom Auto Sound stereo system with iPod jack, and Vintage Air ice cold air conditioning to make it a dream to cruise in the Florida sunshine. 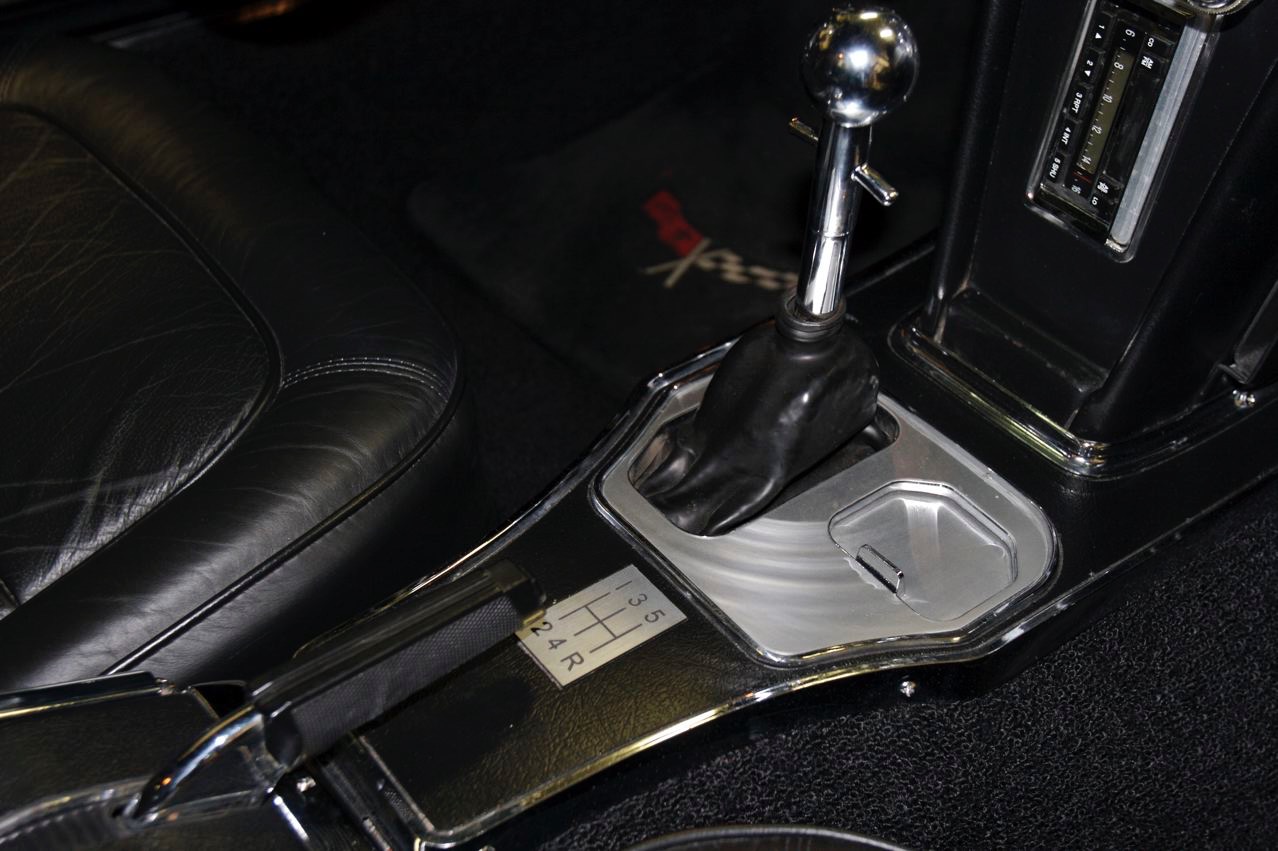 One thing that gets us fired up about this car though is the stance. It just sits right. The tires and wheels are mint, the ride height is great, and it doesn’t have that typical Corvette nose high attitude that everyone seems to thing they had from the factory. This car sits bitchin. Part of that is due to the wheel and tire package which took a bit of work.

Up front are 235/60/15 tires on reproduction 15×7 Rally wheels. Out back Doug and Craig were able to stuff a 275/60/15 Drag Radial under the car by being creative with backspacing on another pair of 15×7 Rallys. As Doug says, “The backspace is a secret recipe.” 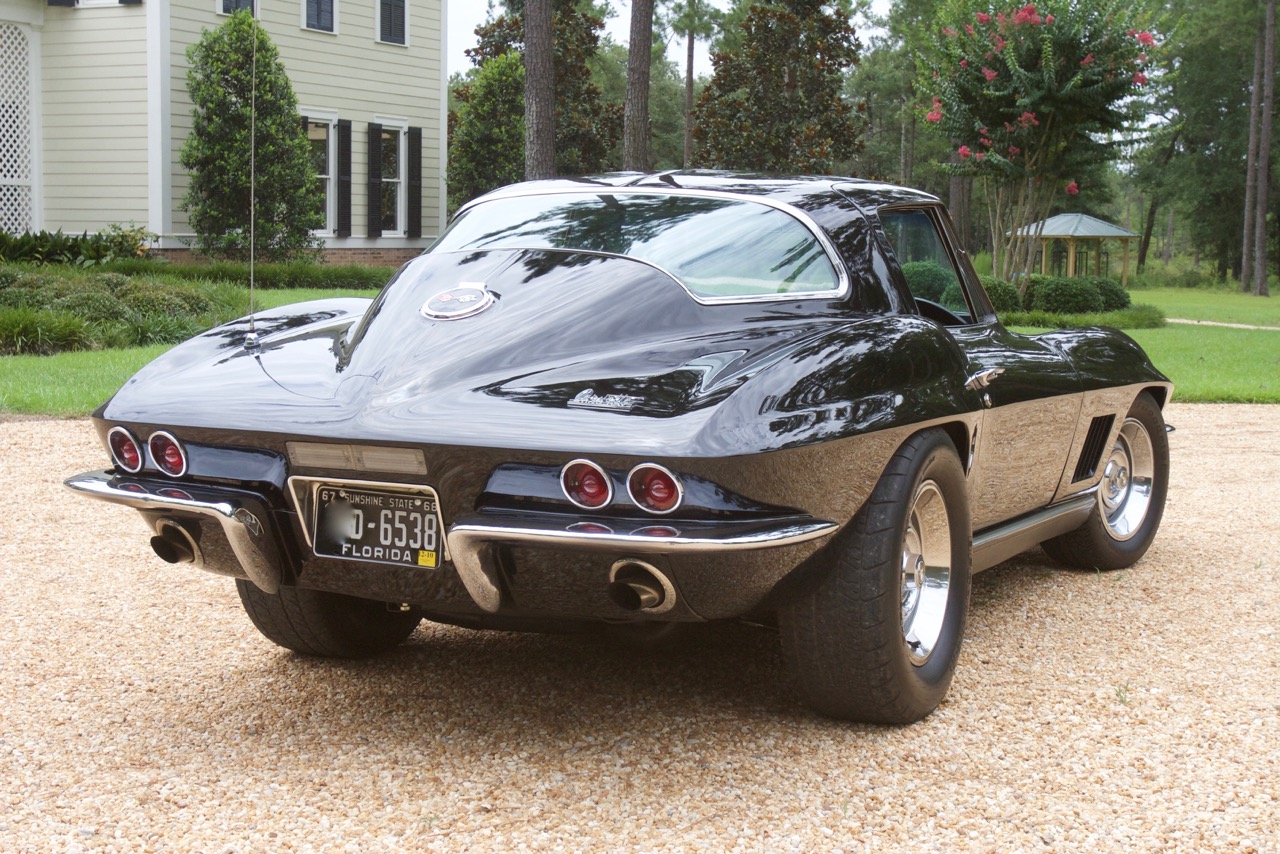 Having done several C3 Corvette builds, I can tell you that stuffing a tire under a Corvette can be a challenge if you don’t know how to work a tape measure, Wheel Fit, or ruler. But if you use one properly you can stuff some real tire under one without touching the quarter panels.

And for all you Corvette freaks that believe you should never ever change one from stock, here’s what Doug told us. ” I still have every piece I took off of this car, and very few holes were ever drilled in it to add aftermarket stuff. If I ever get bored with it, I could easily restore it to original.”

The Nurburgring Claims Another: This BMW M235i Cup Goes Tumbling After Contact With the Glickenhaus SCG003 The Throttle Pedal Moves Both Ways - Why Jay Paynes Pro Mod Crash Was Unnecessary