Gasser Spotlight: This 1948 Austin Gasser is a Stack-Injected Big-Block-Powered Monster in a Miniature Package 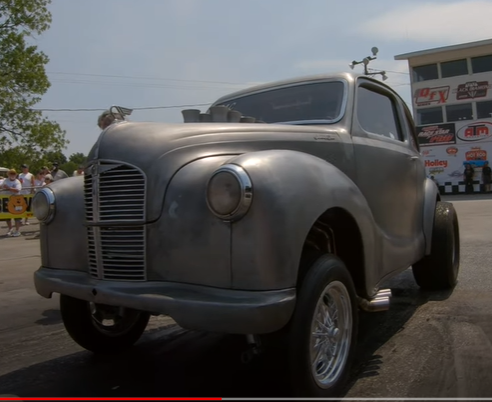 This all-steel 1948 Austin is super rad, and is referred to as the “Bare Metal Brute” for good reason. John Verde owns this thing and built it because his father had one way back in the day. Starting with a basket case gasser race car they found, he and his father completely rebuilt the entire car. The chassis, and all the body, was repaired or replaced by the two of them and made into their vision of a traditional gasser. I love old Austins and Anglias and the like, so this car really speaks to me. Of course the 565 cubic inch big block Chevrolet also speaks to me, but in truth it wouldn’t matter if this was powered by a small block, a Hemi, or even a Ford. It’s just too cool.

For more than 10 years this father and son duo have been out racing the car and having a great time with it and we love that. After all, it proves that the chassis they built and the combo they have put together, will live going down the dragstrip. They love racing at nostalgia races with it, and campaign the car with like minded solid axle gasser owners at events like the National Hot Rod Reunion in Bowling Green, where this cool video was shot.

The F-Bomb Project Is Getting Close To Done! Finishing The Fuselage With Ron Covell Pump Gas Power: Can You Make 900 Reliable Horsepower, On Pump Gas, With A Blown Big Block Chevrolet?

One thought on “Gasser Spotlight: This 1948 Austin Gasser is a Stack-Injected Big-Block-Powered Monster in a Miniature Package”