Watch This LS Blow Thru Turbo S-10 Get Built In Just 10 Minutes. I Wish My Stuff Went Together This Quick! 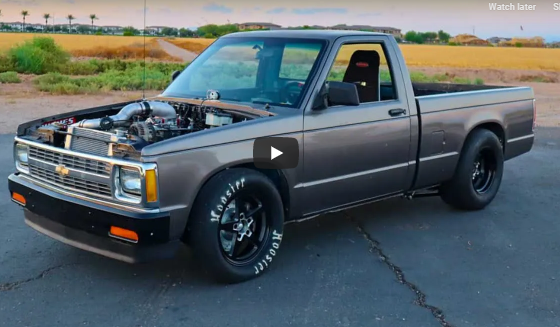 This square body S-10 is a clean little truck that started out like most projects, coming home on an open trailer. But after lots of time and money, it became a cool street strip machine that looks rad and ran low 11’s its first time out. The project continues reaching for the 10s and beyond, but this is a pretty cool time lapse of the initial build. It’s a cool looking little truck, for sure, and we’d gladly drive this thing. Wouldn’t you?

I’ve come to like the videos where folks make a 10 minute version of their builds. They are inspiring, because it makes each step seem simple. Sometimes it is easy to become overwhelmed by project cars because we look at the entire build instead of thinking about just each small task as its own project. You can’t build every aspect of a car or truck at once. It’s all small steps, and watching it this way reinforces that.

I’m a fan of square body S-10 trucks, as most who read the site regularly know, and this one is just clean and simple.  Nothing fancy, nothing complicated, just a cool little truck with an LS and a single turbo. What’s not to love.

It Is A Crazy Boat/Motorhome/Van From The 1980's. It's The Boaterhome!! Road Tour Episode Two: 1500 Miles In Hot Rods, Muscle Cars, And Trucks Like The 1977 Legends Truck

One thought on “Watch This LS Blow Thru Turbo S-10 Get Built In Just 10 Minutes. I Wish My Stuff Went Together This Quick!”