What Could Finnegan Possibly Want With A One Owner Big Block 4-Speed Corvette That Has Been Sitting For 40 Years? 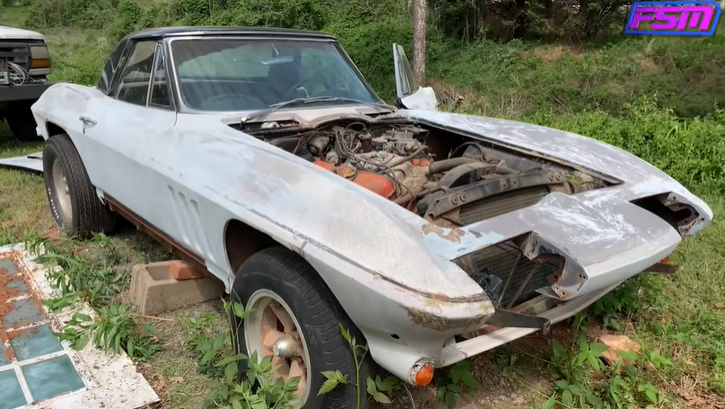 Friends of Finnegans, or those that watch and pay attention to the channel enough, know that Mike would really like a C2 Corvette to build into a fun and fast street strip car. So when he heard about a 1966 Corvette, that’s an original owner big block and 4-speed car that had apparently been sitting on blocks for 40 years or something. So in this video him and Newbern head out to see if they can look at it and see what the owner actually wants for it. In typical old barn find fashion, and because it is a special piece for sure, the owner wants to see what it is worth to the market instead of just taking the first offer.

But does he ultimately take Mike’s money? As usual, this isn’t going to be a super simple or straight forward deal, because Finnegan and Newbern are involved.

We began filming Episode 169 of Mike Finnegan’s Garage about six months ago when I was sent a message about a 1967 Chevrolet Corvette that was hiding just a few miles from my house. The seller told me he was the original owner and had put the car up on blocks 40 years ago, waiting for the right time to restore or sell it. It appears that time has come. Newbern and I drove my dog to the Vet for a checkup and then we continued driving my ’67 Chevy C10 until we found the owner of this derelict 427/4 speed Corvette convertible. He told me it was a ’67 although I think I referred to it as a ’66 and a ’67 in the video. Anyway, after trying to buy the car from him for several months I finally gave up and bought a different car. My friends from Hot Rod Ranch found me an unfinished ’66 Corvette Coupe project car near Livermore, California. The dudes from Alloy/Driven Garage went and looked it over and picked it up for me. This car is more my style; it’s already modified and unfinished, which means I can make it my own. Someday I’d like to turn it into a fast street/strip machine. For now, I just have to make a plan to get it home.

Big Block Power! 1,000 Horsepower Plus, Using Two $163 Ebay Turbos On A Junkyard Big Block. Beater Square Body K-5 Blazer Greatness! Buy This Thing And Be The Envy Of Every Import SUV Driver In Your Town!

4 thoughts on “What Could Finnegan Possibly Want With A One Owner Big Block 4-Speed Corvette That Has Been Sitting For 40 Years?”