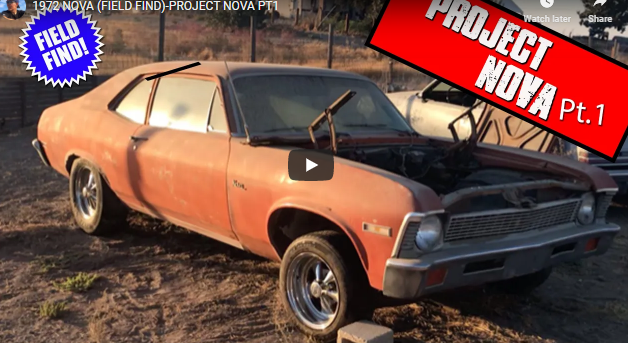 Yeah, it’s been underwater. Yeah, it’s kinda ugly. Yeah, it is going to need a lot of work. But you know what? It’s still a 1972 Nova and it is going to be one hell of a testbed for burnouts! Yeah, you heard me. I said burnouts. Richard is going to be doing engine swap after engine swap with this thing and is going to configure it to take virtually any engine you can imagine so that he can build them, test them, and then install them in the Nova. You always are asking to see the engines go into something, and now your wish will come true. I’ve been talking to Richard about the new project with regards to what he wants and what it needs and he’s putting together a cool list of stuff to make a fun driver that may not be pretty but will probably still turn heads while definitely turning a tire.

I used to own a 1972 Nova and I’m glad that he’s got this one. His idea to cut up any scrap metal to fix the floors for now is totally Richard, because function is the most important thing to him which means it is the first priority. With that said, he’s definitely going to want to drive this one and that means suspension, brakes, trans, rear, fuel system, electrical, etc. We’re quite sure he’s going to pull it off, and if you guys tune in you just might get to help him decide what goes in when!

Supercharged Suicide: Adding A Blower To A Hot-Rodded Power Wheels Ride With Peter Williamson During The 1980 Bathurst 1000 In The Small-Car Class: His Celica Against Ford Capris At 9,000 RPM!