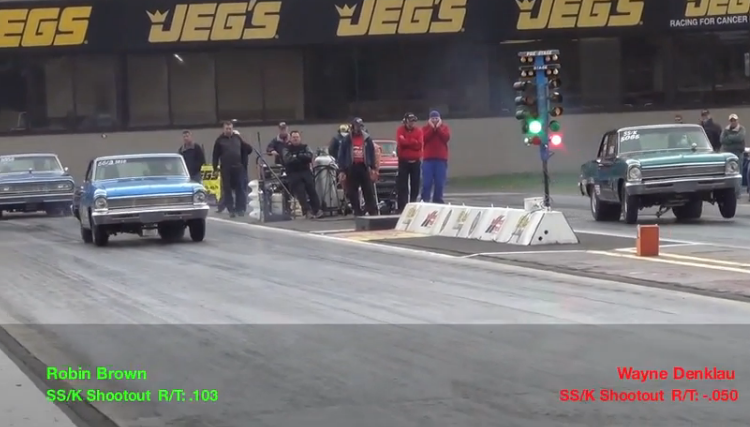 If you never hear from Chad again after today it is because he’s tuned into this video, suffered a stroke, and that’ll be the end of that. Why would he freak out over this awesome nine-minute long string of footage? Mainly because it is concentrated on the Super Stock K class shootout during last weekend’s Auto Meter Northern Class Nationals which was held at National Trail Raceway in Columbus, Ohio. The weekend was a smashing success and lots of sportsman racers are still buzzing about it. Hell, when I was driving home from the Ohio Mile, the highway was filled with drag racers heading home from Columbus. That’s a good sign.

Anyway, this is the SS/K shootout. No breakout, heads up, class legal Super Stock K classified machines. For those of you not understanding what that means the first indication we’re about to see something really cool is the lack of an A at the end of the class name. No A means that these are all four speed manual transmission cars. The Super Stock K class lets us know that we’re talking about small inch small block engines which will be bringing lots of revs to the table. So four speeds, big revs, and heads up? We told that this video effin’ rules!

The footage starts with a walk down the return road where the entire class is stacked up and ready to roll. As we expected, the “shoebox” style Chevy Nova is the dominant body style with the occasional Chevelle and even a little ol’ Mustang mixed in for good measure. During an NHRA National event, there is lots of gamesmanship between competitors who never really want to show their full hand when running down the track, especially the really fast guys who may raise the eyebrow of the tech department and be forced to tear their cars down for inspection. Here’s it seems like all those fears were at rest because everyone is running flat ass out. Heck, we heard of one class where the number one qualifier was a full two seconds under his normal index. THAT will never be seen at an NHRA national event!

Enough of all that. Let’s watch the video and listen to good old gear banging, wheels up, drag racing!