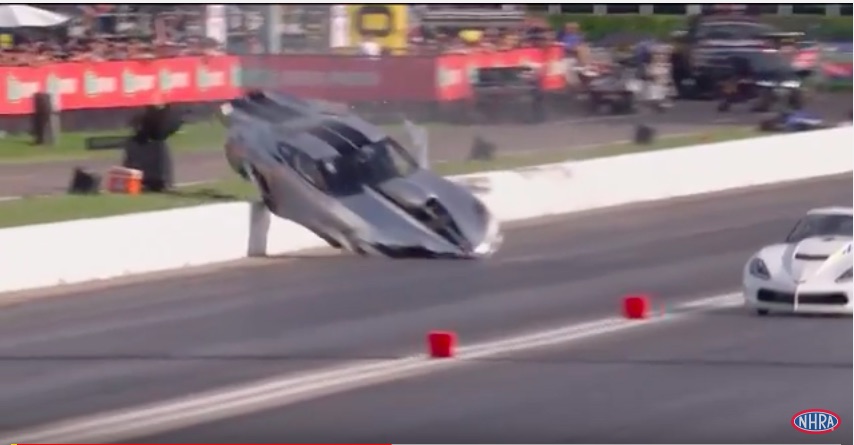 If you are an NHRA J&A Service Pro Mod fan you know that there was some true insanity during the 2016 NHRA event in Houston, Texas. Three major league wrecks headlined that race and competitors returned to the facility this year with an eye on taming the place. Outside of the typical sideways craziness that the pro mods bring with them 2017 saw one well liked competitor take the ride of his racing career during eliminations. Bob Rahaim’s rough J&A Service NHRA pro mod ride could have been lots worse. Thankfully he walked away and reportedly will be racing this weekend in Charlotte with a car he has recently purchased. More on that in a second because this run has something else you never see going for it outside of the wreck.

As you watch this video your attention will clearly be on Rahaim’s car as it hits the wall on two wheels and tries to take flight over it. You’ll see the parachutes deploy and then you will see Bob still steering the car as it shoots across the track and he drags it to a stop. That’s a race car driver, right there. On the wheel until the last second. What you will also see is Sidnei Frigo striking the orange blocks in the center of the track. This is important because it resulted in a double disqualification.

The NHRA rule book states in section 2 that if both competitors cross the center line of the track on a run they can both be disqualified. If one competitor is trying to avoid another competitor the action is waived but that was not the case there (despite what you hear the announcer say). The other situation where a double cross may not be a double DQ is in a final round. Someone has to win the race. That’s a race control decision.

If the reports are true that Rahaim has secured another car for this weekend it would be amazing. We know he has a new car coming that is going to be done in a month or two but this wreck was certainly not in the plan. We hoping to see the smiling Michigander in Charlotte so we can shake his hand and wish him well.