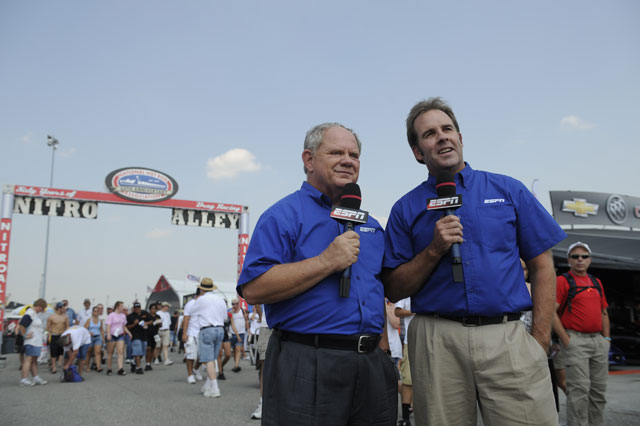 (Photo credit: ESPN.com) – Normally the rumor mill is nor our jam but since we have had this one boomerang back to us multiple times in the last two days from some guys who typically know stuff, we’re filling you in one what we have heard. On February 9th there is going to be an announcement made by the IHRA as to who their new president is. While there have been some high level departures at the NHRA recently we have not been hearing that any of them will be involved but we have heard one name come up three different times and that name is former ESPN NHRA Tv commentator Mike Dunn. Dunn had a very successful career driving nitro powered race cars racking up 22 national event wins (12 in funny car and 10 in top fuel) and 40 final round appearances. He is in rare company as having been one of only a handful of guys to snare more than 10 wins in both top fuel and funny car as well.

He spent 14 years in the booth on ESPN as a color commentator during the NHRA season and when plans were announced that he would not be coming back for 2015 there was a strong reaction from his loyal fanbase. The NHRA has since proceeded with their television package development adding a mix of familiar and new talent to the program.

If this is true and Mike Dunn IHRA President is a thing, the IHRA will certainly have someone who appreciates the world of fuel drag racing but we’re not 100% sure what else Dunn brings to the table outside of his expertise in the booth and technical aspects of the machines. As best we know he has not operated a race track, he has not promoted events, he has never been a sportsman drag racer, and we’re not sure that he has helmed an organization before.

This is not to say we are wishing the guy ill, because we are not. Just stating the fact as we see them here. If Mike Dunn is the next president of the IHRA it’ll surely make a blip on the media radar and we’re sure his television fans will be amped up about it. From that point forward it will be interesting to see what he or whoever else takes the reins of the organization decides to do with it.

Heck, maybe he can talk them into keeping the World Series at Cordova because we keep hearing that race is exiting to a different (and smaller?!) facility. Stay tuned kids, Feb 9th is the day!