Birdman Defeats Kye Kelly For $15k In Texas Some No-Prep Wreckage Along The Way At Redemption 4.0 (Videos) 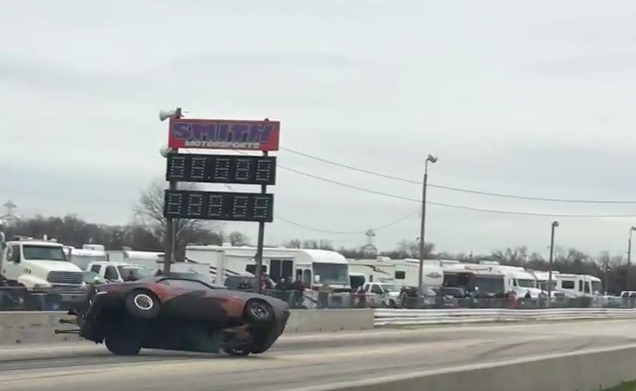 Lest you thought that there was no big money left to win in the no-prep world at this time of the year, the crew at Texas Raceway proved you wrong. The eighth-mile track in Kennedale, Texas had their Redemption 4.0 event last weekend and with no track prep and temps hovering somewhere in the 40s, it was as hairy as you’d expect. It as also as packed as you’d expect with people coming from all around the Houston area to take in the show. Drag racing’s version of gladiators VS lions didn’t fail to deliver some big thrills and some pretty wild spills as well. As we commented on a Facebook thread about no-prep racing the formula is simple.

The wrecks bring the people, the people bring the money, and the money brings the cars. The money was certainly there as Kye Kelly in his famed third generation Camaro that has laid waste to the best that the television drag racing world could throw at it fell short in the final to the Birdman (new) fourth generation Camaro. Both of these guys are hitters the grudge, no-prep, and no overly glorified world of “street racing”. Between the walls at Kennedale with no prep on the strip they both waded through competition over the course of the cold day and a $15k payout is nothing to sneeze at. There’s a new Street Outlaws spin-off coming that is centered around Kelley, so you’ll be hearing lots more about him in the coming months although his legend in this part of the sport already looms large.

Now, as usual there was some wreckage over the course of the weekend. Close calls keep it interesting but two guys hammered their cars pretty hard. The well-known Cornbread Camaro barrel rolled through the lights in pretty spectacular fashion after crossing the track and nearly clipping eventual runner up Kelly. During a pre-race test Ricky Wilson’s Firebird caught a case of concrete poisoning and judging by the nose of the car, it ain’t the first time. Below we’ll include the videos in this order: Final round race of Kelly VS Birdman, Cornbread barrel roll, and then Wilson hitting the wall.

What’s our opinion on “no-prep” racing? No one has a gun to the head of the competitors, they know what they are getting into, and the tracks are reaping huge profits. If you are screaming about someone getting killed, think about this. We were at a race two months ago on a prepped track that had multiple wrecks a day. This had two over a multiple day event. It’s all dangerous, kids.

How To Build Your Own Chassis Table With The Guys From Eastwood Best Of 2015: Watch As Marc Marquez Ditches His MotoGP Bike For His Backup During Qualifying For The Grand Prix of the Americas Race In Texas

11 thoughts on “Birdman Defeats Kye Kelly For $15k In Texas Some No-Prep Wreckage Along The Way At Redemption 4.0 (Videos)”