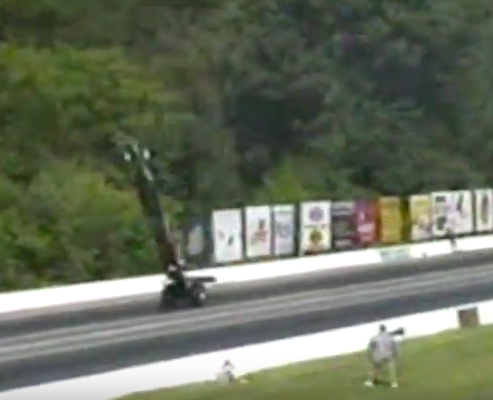 One of the strangest things to see in drag racing is a blow-over. From the stands and TV it looks like slow motion and by yelling “LIFT” you think you can help but it’s already too late. The dragster you are trying to will back down is straight up and flips over backwards into pieces, losing body panels, and coming to a crushing halt. It is a strange and spectacular event that most of the greats like Garlits, Schumacher, and Dixon have all experienced once or twice.

This video brings us back to 2004 when wheelie bars were not used as much on the top fuelers or top alcohol car as they are today, and that includes Mike Burns who was driving Len Cantrell’s Chicken Chokers blown alcohol dragster at the NHRA Divisional Race at Lebanon Valley Dragway.

In the third and final session of qualifying, Burns was in the ninth spot looking to improve and get into the quick eight and qualify for eliminations. The two blown cars on the starting line bring up the rev’s and bump into the beams. As the tree flashes yellow the cars launch; Paul Sylvester has immediate problems and lifts, as Burns in the other lane launches hard into a wheelstand, and continues to climb and gain speed until the point of no return, where the car takes flight and flips. A dragster is clearly a long vehicle but it is never so clear until one is standing straight up. After Burns landed and stopped, he came out of the wreckage to race another day.

Check out the Top Alcohol Blowover below:

Killer Old Video: This 1954 US Army Film Does A Pretty Amazing Job Explaining How A Fluid Coupling Works Morning Symphony: Get An Earful Of The 1959 Chevrolet Biscayne "Duntov" Patrol Car!