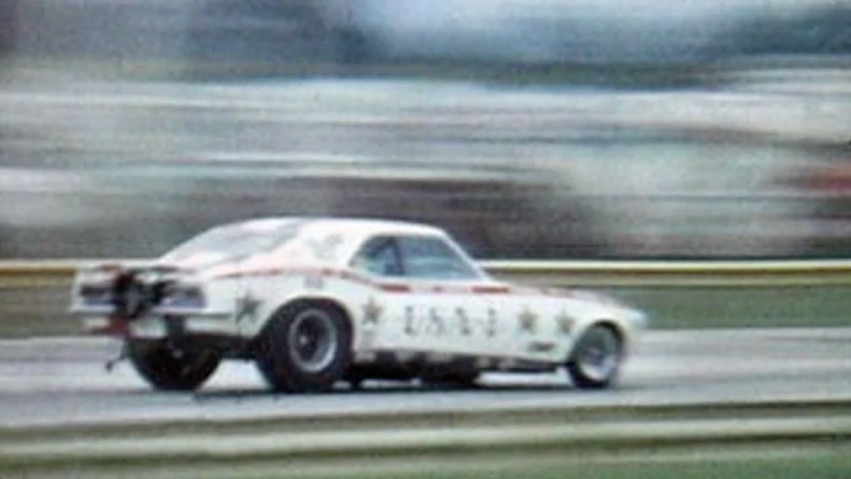 With Indy being the site of the NHRA “re-start” races last weekend and again this weekend, we wanted to look into its past. These films were made in the late 1960s at the US Nationals and show a very interesting time in the world of the funny car. You’ll see flip top cars, you’ll see Bruce Larson in his Camaro, and you’ll see a raft of awesome machines running in front of the assembled throngs in Indy. The one thing that sets this video apart from virtually every other amateur 1960s drag racing film we have seen are some unique freeze frames. The film stops and you see pretty clear images of the machines the video camera operator is following.

There’s a lot of debate in the world of nostalgia funny car racing about what a nostalgia funny car should look like and we think tat they should look like the cars in this video. These were the machines that evolved from the weirdo altered wheelbase cars and these are the machines that blew up like drag racing’s version of a neutron bomb in popularity.

Remember, in 1969 there was no such thing as as 24-race national event schedule. There were a handful of NHRA events and there were match races from seat to shining sea in order to make a living. These big meets were a bit of a departure in protocol for everyone. Staying at one place for days on end was weird. Running multiple tracks in a weekend was nothing to these guys.

Outside of the funny cars there’s a cool altered to see and a Cammer powered Mustang shown as well. Those are among our favorite drag cars of all time. This whole video is great and you are going to love it.

Watch This Elephant Turn A Pretty Big Truck Over After Playing With It Like A Toy Grand Touring or Grand Boring? Check Out Three GT Cars From Across The World With Very Different Personalities