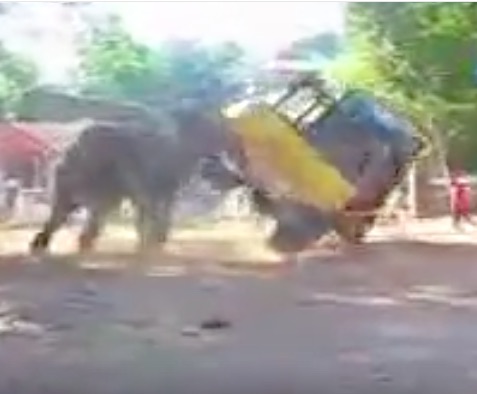 Strength is one of those relative things that we think we understand as humans but we really don’t. It is one thing to see a video of an elephant picking up a tree in the wild and throwing it like a stick with its trunk but to really get a sense of how strong these big guys are, watch the video below. We have seen a bunch of videos that depict elephants being transported in the back of flatbed trucks like the one shown. We’re guessing that the elephant in this video had enough of that and decided that he wasn’t going to get in the truck, or any truck for that matter. As you will see, the big fella walks over to the rig and nudges it. The multi-ton machine moves like a toy and then things get really interesting.

While we have no idea how “hard” the elephant was working it sure doesn’t seem to be exerting all of its strength when it begins to push the truck around in a circle. By that time multiple people start throwing rocks at the beast. This falls in line with the old movie line, “Don’t shoot him, you’ll only make him angry.” The rocks don’t so much as delay the elephant for a moment and the animal then moves in for the kill, lifting the truck up with its tusks. The first attempt did not result in the truck being on its side but the second one sure did. The video cuts off shortly thereafter.

We’ve got no idea if this elephant was being used for work to move heavy things or if it was being used for entertainment or what but we do know that the people near it and around that truck were certainly passengers, only along for the ride when the big Pachyderm decided that enough was enough.