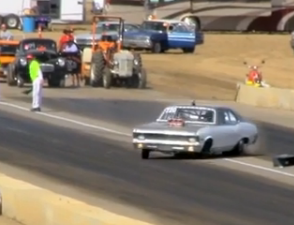 The Eagle Field Drags are an event we’ve been trying to get to for years now. The race is held on an old airfield and really is an affair that harks back to the days when the sport was about getting together with a bunch of like-minded speed freaks and seeing who had the fastest junk. Rocky and the guys that organize the Eagle Field Drags stepped things up a bunch last year by having some of the coolest AA/FAs known to man show up to run down the fabled strip. Pure Hell, Pure Heaven, and others tattooed the strip with rubber and smoke during the event and Les Mayhew caught it all in this film which is shade less than three minutes long. Going the extra mile like he always does, Mayhew laid vintage Buddy Holly over the drag racing footage, giving this video the perfect retro feel.

The video does a great job of catching great runs, some chills with respect to sideways burn outs and one very close “miss” between a 1955 Chevy and a Ford coupe. That footage is crazy because for a second it looks like both cars are curtains. Thankfully that was not the case. The Eagle Field Drags have continued to grow and flourish and there are no signs of let down. They’re actually hoping to be racing TOMORROW! Click here to learn more and if you want to get a face full of vintage, no frills drag racing now’s your chance. We have long maintained that this is the greatest time in history to be a drag racing fan. The venues and organizations that exist to race with, the number of organizations catering to different crowds (vintage, door cars, etc), and the accessibility to go fast parts have never been better.