The Island Nation Of Madagascar Has A Drag Strip And Some Pretty Fast Cars! (Video) 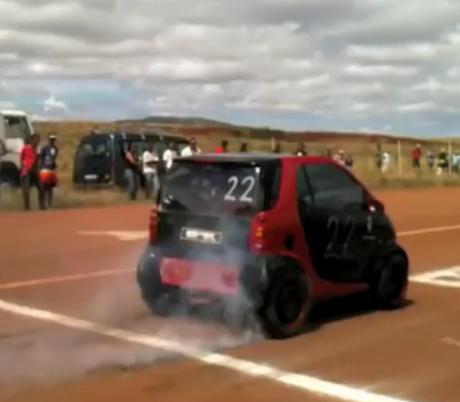 Most people hear the word Madagascar and probably think of the kid’s movie that shares the same name as the 4th largest island in the world. Located off the coast of Africa in the Indian Ocean, the island nation of Madagascar is home to one of the world’s most unique ecosystems, about 22 million people, and at least one drag strip where residents can hammer the daylights out of their hot rods and they do have some hot rods! This video shows a pretty decent variety of cars being beat on down a quarter mile strip that seems to be made of packed clay. The racing surface is hard enough that spinning tires actually leave rubber on it but we don’t think it is concrete or asphalt due to its coloration. The track is a quarter mile in length.

The vehicles you’ll see making passes down the course include BMWs, a Subaru, a couple of Fords, and a very hairy sounding Smart car. The Smart has a 1,000cc supercharged motorcycle engine in it, that’s why it runs and sounds like it does. According to the description on the video, the quickest run of the day was an 11.32 sprint down the track made by a Ford Sierra Cosworth, a car we did not have the opportunity to buy here in the USA.

Some things to note. You’ll see the presence of military guys presumably working security at the starting line .You’ll also see what seems to be a significant crowd of people lined up down the fence on the right side of the track. The cars are launched by a starter as opposed to a Christmas Tree but there are definitely time clocks and a small score board is set up about 20-30 feet past the starting line for people to see elapsed times. The trailer in the background behind the cars is clearly race control as it has speakers on it for the announcer and we’re guessing a time slip printer in it as well. Hey, if you have clocks, we’re thinking you can print a time slip.

Some facts about Madagascar lead us to believe that drag racing isn’t exactly the “sport of the people” as it is here in the USA and in other parts of the world. Our research indicates that a large portion of the population of the island lives on about $2.00 per day. That doesn’t leave much for a hot rod budget even by our tight-wadded standards. The cars that were racing look cool and as we mentioned above it appears that people showed up to watch in droves.

We love the fact that drag racing can be found literally anywhere in the world…even on an island off of the eastern coast of Africa, where any and everything mechanically related has to be imported…even the cars!

2 thoughts on “The Island Nation Of Madagascar Has A Drag Strip And Some Pretty Fast Cars! (Video)”