Happy 4/25! Today We’ve Got A Three-fer! Buick, Olds, and Cadillac Engine Inside 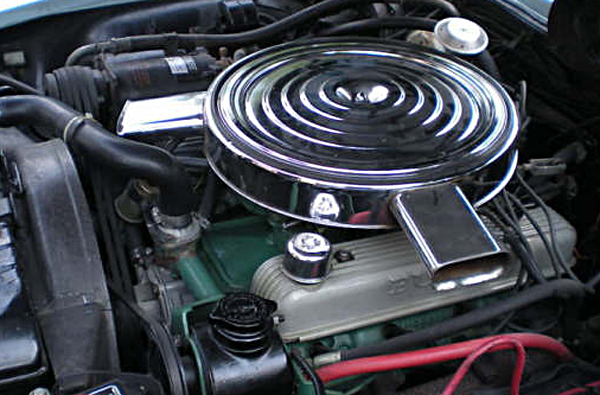 We have plenty of days with two engines but there are very few with three engines to highlight during the months of March and April. This is one of them and we’re talking Buick, Olds and Cadillac. There’s the stout 425ci Buick nailhead, the even badder-asser Olds 425 engine that was one of the hidden gems of the muscle car era, and the Caddy 425 that wasn’t. Three V8s that need some love. We’re going to take these three engines from the least power to the most. That means the Caddy is up first.

Like many of the engines we have showed you over the last month or two, the Cadillac 425 did not have a very long shelf-life. Introduced in 1977 and discontinued in 1979 the sole purpose of the V8 was to increase fuel economy from the dismal levels delivered by the mighty 500 that preceded it. Using the same basic architecture as the 500 and the same stroke, the 425’s 4.08 bore was the part that shrunk. As a performer the engine was on the leading edge of its day in the dark edges of the late 1970s. 180hp with a 4bbl carb and 195 with EFI, both engines produced 320 lb/ft of torque. The biggest savings with the 425 was it’s 100b weight reduction over the engine that it replaced.

Now like everything else we talk about around here, because an engine is not the greatest from the factory does not mean it’ll escape the clutches of hot rodders. Here are a couple of 425s that are doing better than they were when the factory screwed them together.

Story continues under the videos!

Continuing on – We have the 425ci Buick Nailhead! The biggest and baddest version of the Nailhead engine was the 425. It had factory ratings that ranged from 340-360hp depending on the induction setup that was bolted to the top. The top shelf engine was the dual four bbl carb equipped model that was first offered as a dealer installed option and then it was factory installed. Cars like the Wildcat GS and Gran Sport GS were offered with the hairy 360hp version that made a pretty awesome 465 lb/ft of torque. The engines were promoted on their torque output which was interesting. Instead of calling the engine the Wildcat 425 based on displacement it was called the Wildcat 465.

This was a large bore engine for its day (4.3125 inches) that packed a stroke of 3.64 inches. The engines had forged steel cranks, forged steel rods, and a hydraulic lifter cam was used. Interestingly the 425 used the same exact cylinder heads as the 401 with no modifications for the larger displacement.

Here are some cool Buick 425 videos!

Lastly but not lastly – The Olds 425 is really kind of the hidden hero on this list. The engine came in several forms and was used as a replacement for the vaunted Olds 394 that had been the largest version of the original “Rocket” V8 engine. Used in full sized cars only between 1965 and 1967, it could be had with big compression and conservative ratings from the factory had it tickling the 400hp range.

The engine has a bore and stroke of 4.125 and 3.975 respectively. Configuration-wise, it was close to the 400ci engine that was Olds’ bread and butter in that era. A forged crank, a single four barrel carb, cast iron intake manifold, and a hydraulic lifter cam were all parts of the recipe. As you’ll learn in a minute, not all 425 Oldsmobiles were created equally and the Toronado was the reason. The company wanted that car to be it luxury and horsepower king so it got better heads with 2.07 inch intake valves instead of the 2.00 inch valves used in other 425s.

So the kind of standard version of the 425 was called the Super Rocket and it powered the Olds 88 and 98 from 1965 to 1967. With 10.25 compression it was rated at 360hp. The Starfire version of the engine got better exhaust manifolds and a slighty more radical camshaft. Although it carried the same horsepower rating as the Super Rocket, it was likely a stronger player. Lastly there was the Toronado Rocket which used a larger lifter which allowed engineers to throw some more camshaft at it for a horsepower rating of 385 out of the box. That one was the top dog.

Rough Start: Mom, Get The Small-Block! This 1980 Chevette Needs It! Awesome Video: How To Haul A Steam Locomotive Through London And Park It In A Museum Circa 1961

2 thoughts on “Happy 4/25! Today We’ve Got A Three-fer! Buick, Olds, and Cadillac Engine Inside”