Watch This Twin Turbo, Small-Block Opala Haul Tail And Nearly Jump All Four Off The Ground In Brazil

Feb 21, 2020Brian Lohnes1320 Videos, BangShift 1320Comments Off on Watch This Twin Turbo, Small-Block Opala Haul Tail And Nearly Jump All Four Off The Ground In Brazil 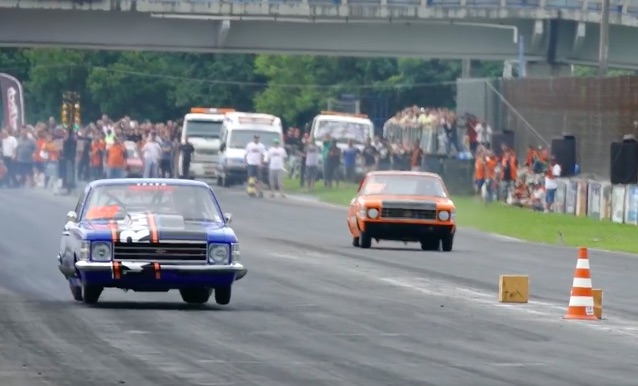 If your local drag strip has a bump in it, you’re best not to mention that fact to drag racers from South America, Brazil specifically. Why? Watch this video and see a car, a beautiful car, put three and possibly all four tires off the ground at a thousand feet while running full throttle. Obviously the fact that this thing exists isn’t a surprise to these guys. They know that its there but racers being racers, they make the best of their situation and the best of their situation means hammer down and attempting to set low ET of the meet. You want to talk balls? This is balls to the tenth power.

Before the jumpy stuff happens (which you will see from multiple angles), you have ample opportunity to admire the car that is the centerpiece of this video. It is a classic Chevy Opala powered by a twin turbocharged small bloc Chevy engine. The car is immaculate and includes details like the factory emblems in the factory locations, amazing paint, a perfect stance, and just a killer look that spells bad ass on any continent and any drag strip you’ll ever go to.

The track that they are running at is the Curitiba Autodrome a multi-use facility that truly defies the term. A road course, a drag strip, and gathering spot for gear heads you’ll find everything from the stuff in the video below to Formula Truck, open wheel racing, world touring car racing, and more at this place. The strip is the long straight used on the road course so while it is not a 100% dedicated drag facility it is part of a track and seems to be professionally operated from the various footage we have seen and shared over the years. Being that it is part of a larger road course, prep may be limited or even prohibited. On a road course, you can pick you line and avoid big bumps. On a drag strip? Not so much.

This video rules for many reasons but mainly because it showcases the spirit of drag racers front and center.

The 1983 Subaru Turbo Traction Wagon Was Kind Of A Dinosaur, Slow, WRX...Or Not Small Wonder: Check Out This 1/3 Scale Cosworth DFV V8 Engine Both Running and In Detail!