Chase ’em Down! Watch This Mustang Run Down A 7.70 Door Slammer Like It Is Tied To A Tree! 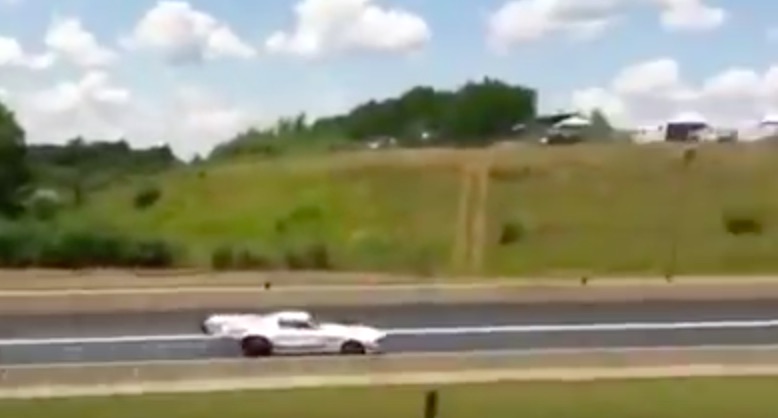 Bracket racing is not for everyone; unless you know exactly how it works, or are specifically cheering on someone, and I can understand the argument, but when a Pro Mod enters into the fast bracket class of Top Sportsman the chase is exciting for any drag racing fan, and creates a clear realization of how fast these cars really are.

This video is a flashback to July 2012 at the Lucas Oil Division 1 race at New England Dragway where Angela Ray; a Northeast Outlaw Pro Mod Series regular, who has been 5.94 at 238 mph, the 2013 NEOPM Rookie of the year, a top five points finisher in the series, and won the most recent NEOPM Race at Capitol Raceway Aug 6; was running her blown ’67 Mustang Pro Mod in Top Sportsman for the weekend.

Angela, daughter of NHRA and IHRA Top Alcohol Funny Car driver David Ray (former driver and multi-time national event winner of the Follow A Dream Funny Car), not only qualified her Dan Page built Mustang in the number 1 spot with a conservative 6.326 at 227.96, but raced her way to the fifth and final round of the event, beating the likes of Ryan Ondrejko, Ray Thurston, and Michael Cerro; cutting .00x lights and running close to the dial.

The video picks up the action in the final round, where Angela is running for the money, the Wally, and to prove everyone wrong about a Pro Mod in Top Sportsman. Her opponent, from the bump spot, number 32 qualifier, Larry Willard who is wheeling Eddie Iannotti’s ’33 Willy’s (formerly the West Coast Choppers Pro Mod driven by Ron Iannotti), who was running consistent 7.70’s all weekend. While a 7.70 in a door car is nothing to be ashamed of, Angela passes Willard on the big end like he was tied to a stump and takes the win with a 6.464 on the 6.42 dial, at 227.73 mph!

Check out the epic chase from the top end in the video below:

2020 ECTA Firecracker Mile Gallery: The Opening Roar At Arkansas Using The Wrong Lube Hurts! Here Is The Straight Truth On What To Use To Properly Torque Your Fasteners

One thought on “Chase ’em Down! Watch This Mustang Run Down A 7.70 Door Slammer Like It Is Tied To A Tree!”