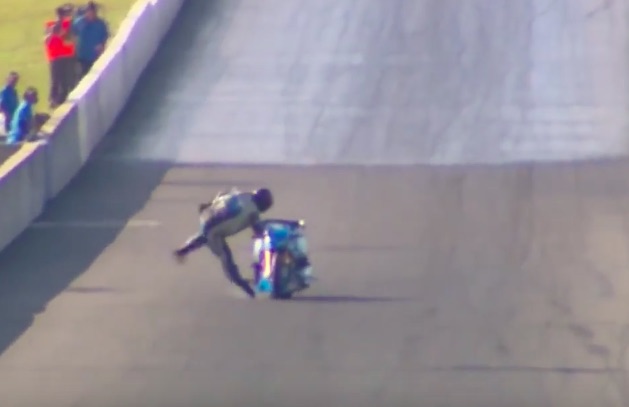 If you hadn’t counted on the physics of the wind against the human body at over two hundred miles an hour, you could be forgiven for thinking that Australian Top Bike racer Chris Matheson just decided to step off of his Nitro Voodoo bike after a bye run that alone would qualify as one of the sketchiest bits of 1320 footage we can come up with. Matheson and the Nitro Voodoo bike had been on a tear at the prior event at Willowbank Raceway, with the bike running a [email protected] MPH blast and consistently above 200 MPH in the eight runs he made there. Willowbank, however, was only an exhibition and the team used the track time to get prepared for competition at Sydney. The team knew that the bike wasn’t happy with hot tracks and liked to get a little loose (even running a couple of full-track spinning runs…yikes) but as long as Matheson got the bike collected up and pointed straight, that the run would work out in the end.

Instead of just breaking beams during a bye run, Matheson went for it and from the hit, the bike was not happy. It’s loose, it’s up, it’s fishtailing, but by mid-track it looks like the theatrics are over and that the run will be solid. And then…well, there was a bump. In an interview with Dragbike.com, Matheson explained what happened next:

“I was mindful of a bump in that lane and ordinarily apply the brake after it but I was also mindful that the speed was up so I was keen to grab the brake and let it settle down. Just at the time I released my fingers to do that, I hit a bump, the handle bar slapped my hand and
lifted my fingers up into the air which is pretty much the same as holding your hand outside a car window at 100kph. At that speed you can move your hand up and down pretty much but when you multiple that by three  and some. I think we went through the finish line at 370ks so you would have a good idea what happened next.” Which was the wind throwing the “double door fridge”-sized Matheson clean off of the bike and onto the ground, semi-rolling, semi-skidding down the remainder of the shutdown area while Nitro Voodoo, now running solo, made a 180MPH beeline for the trees and bushes past the sandtrap.

As violent as the crash was, Matheson was more-or-less fine after the accident, with only a broken ankle, some rash and some minor burns for his trouble.

One thought on “Classic YouTube: Chris Matheson’s Australian Top Bike Crash – Off The Bike At Over 200 MPH!”