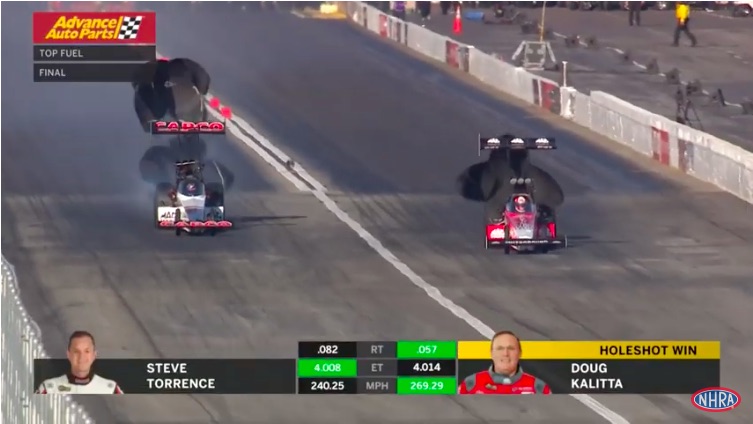 It was an awesome ending to a long race. Doug Kalitta and Steve Torrence were the last two guys to go rip-roaring down the track a the 2019 Lucas Oil NHRA Winternationals. Torrence was trying to keep an incredible win streak alive and Kalitta was trying to repeat as the event champ. They were the two best driver/car combos on the ground with Kalitta having already won two rounds on hole shots and Torrence having been right there on the tree all day as well.

As both of the top fuelers accelerated down the track they smoked the tires nearly in perfect synchrony and it was Kalitta who did the better job of gathering his car up and charging to the finish line in one piece. You will see Torrence also pedaled to get traction back but his car backfired the supercharger and allowed Kalitta by and with not much room to spare.

Torrence is the defending world champ and Kalitta was the defending Winternationals champ. Doug stands as the winningest top fuel driver without a title at this point and we will be the first to admit to believing that once again, this could be his year.

This was one heck of a Monday afternoon final at Pomona!