Rough Day At The Office: Wreckage, Carnage, and Downright Insanity At The NHRA Midwest Nationals 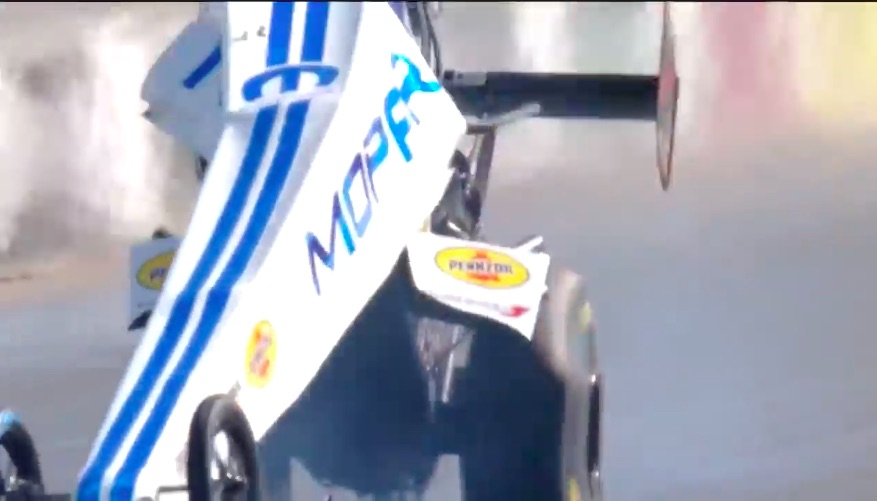 It was one of the most carnage filled days of drag racing that I’ve ever personally witnessed. From Leah Pruett’s top fuel dragster breaking in half at 270+ mph to Alexis DeJoria suffering the worst funny car explosion in years, and Kenny Delco crashing a pro stocker, this was not your average Sunday at the drags. The videos below show the three incidents I listed above but there was other stuff like a sportsman dragster crash, Antron Brown leveling a top fuel engine, a couple more near-misses in pro stock and the insane conditions, this was just a non-stop barrage.

Oh, and the NHRA announced a new title sponsor scantly two weeks after Coca-Cola exited their partnership unexpectedly. That happened, too.

Leah’s incident which is hitting lead-off below was a very scary one the likes of which has been suffered by people like Tony Schumacher and Larry Dixon over the years. The car was traveling down the course and then right around the eighth mile mark the chassis broke off right at the foot box, the car took flight, and Leah was on the ride of her life. The parachute deployed and that helped keep the remains of the machine righted and also slowed it down.

The car landed on its wheels and then skidded to a stop in the shutdown area. The front end of the car flew at least 100 feet in the air. The whole thing was completely and utterly mental. She walked away.

For Alexis, it was holes out and then it was the massive concussive force of an engine backfire that shredded her body and put her driving skills to the test.

Kenny Delco’s pro stock crash was one of the reasons that pro stock eliminator was stopped early. The high winds, the low temperatures, and the fact that these cars were just hating life at the top end were reasons that the low downforce classes were shut off for the day. Pro Stock, Pro Mod, and Pro Stock Motorcycle were all stopped after the first round, with pro mod actually never getting on the track. It could have been bad with the way the day was shaping up.

This really was a nail-biter. Doug Kalitta and Tommy Johnson were the nitro powered winners and the season will resume in Dallas, Texas in two weeks. Hopefully with a little LESS excitement.

Opala VS Maverick - Watch These Brazilian Flyers Rip Down The Track From Every Angle, Even Inside! BangShift How To Tech: A Step By Step Guide For Rebuilding Rochester B Carbs

10 thoughts on “Rough Day At The Office: Wreckage, Carnage, and Downright Insanity At The NHRA Midwest Nationals”