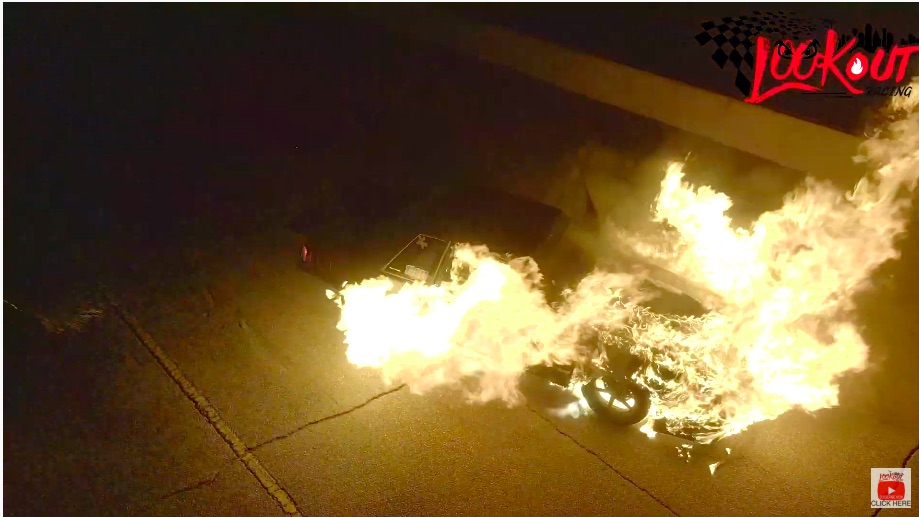 If you are a racer and you can watch this video without thinking about your own safety equipment and habits, you are either doing all the right stuff or you are out to lunch. Brenden Mills is a hard running and well respected X275 racer from New Jersey at last weekend he was running at Darlington Dragway as part of Woostock. It was on the run you will see below that a confluence of things happened and it turned his car into a rolling fireball.

The guys at DragZine caught up with him and reported that the welds around a cap that would normally be used for an EGT bung broke and this allowed the escaping fire from the cylinder head to act like a blowtorch. This cut through a fuel line and killed the engine but the fuel pump was still roaring and that’s when things got really, really bad.

Mills got the car to a stop and as you will see in the video, there was an agonizing delay in him being able to get out. His HANS device and helmet were stuck in the car. He doesn’t specifically know what they were stuck on but he was basically trapped. In a move that saved his life, he pulled his gloves off, unbuckled his helmet and was literally able to slide out from under it and escape his car. He was seconds away from being overcome by the fire and the heat.

If he had not been wearing -20 layer fire equipment, he would have been in danger of losing his life, undoubtedly. Mills was there with his wife and kids who witnessed the incident, which makes it doubly hard to think about.

We’re very thankful he is OK and we’re hoping that video like this has you thinking about safety in your own race car, no matter the type.

The Evolution Of Speed: A Look At The Quickest 0-60 Cars In The World From The 1950s To Today! Money No Object: The Period-Correct Pro Stock Dodge Challenger