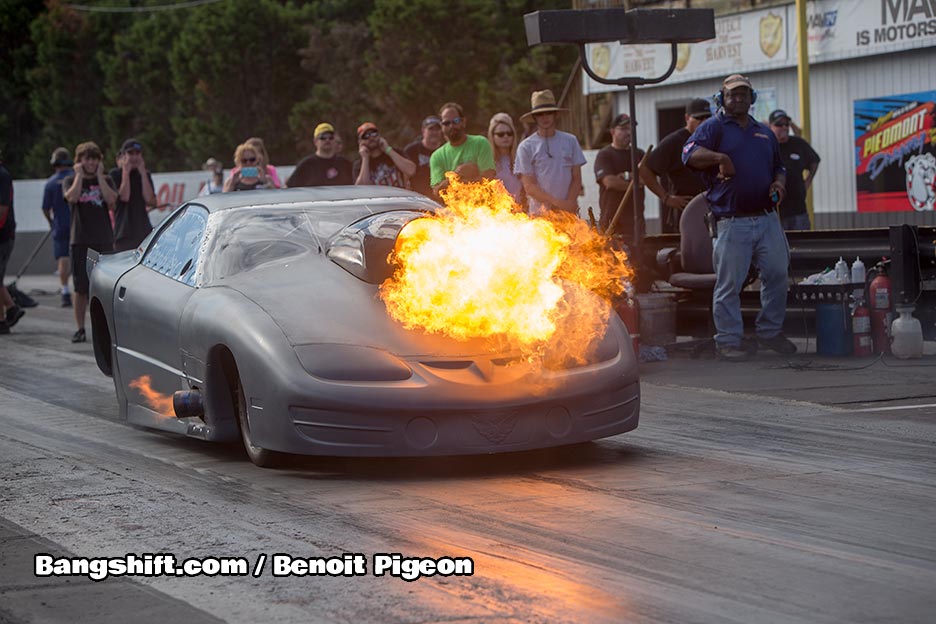 (Words and photos by Benoit Pigeon) – The Extreme Outlaw Pro Mods series was racing on the 4th at Piedmont in Julian, NC, home the monthly Big Dog. As mentioned in the past this is a tough race for very demanding vehicles and this event was no different for anyone.  There were many transmission problems with failures and therefore skipped qualiﬁcation runs.

In fact, even some of the most experienced teams were not spared from the reality of this harsh and fast paced racing. Two blown cars made the ﬁeld and the rest was all nitrous including some of the fastest current Pro Nitrous teams.  Ty Tutterow who qualiﬁed third aboard his blown Camaro could not make the show due to transmission issue and “Christine” driven by Chris Cline was eliminated during round one. After round one, the remainder of the race was all nitrous including Chris Rini and Tommy Mauney.

The ﬁnal saw Jay Cox on the left lane versus The Carolina Kid, Travis Harvey in the Boone Racing Camaro.  Jay took the win with a [email protected] over Harvey’s [email protected], the fasted run of the day. The point leader after this third event of the year for the EOPM is Jay Cox.  The series will be back at the same track, in Julian early August for the next round.

This Mashup Of A 1986 F-250 and an F700 Truck Is Perfectly Executed And Ready For Dozing Zombies! Our Summer Of Roadster Love Continues: Here's Another 50 Roadsters We're In Love With