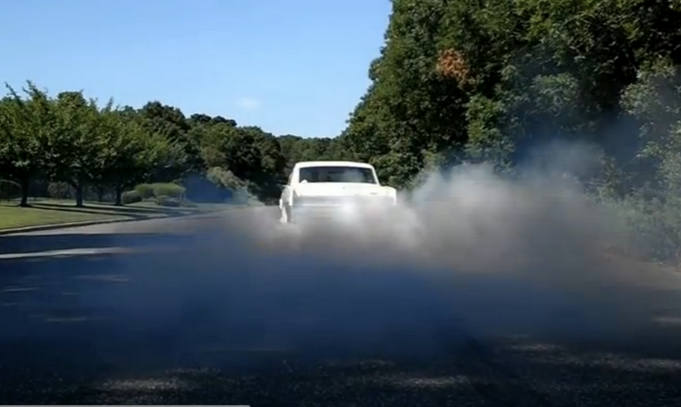 Some guys know and some guys don’t, but back in the early 1960s, Pontiac built a 194ci four cylinder engine and used it in a few of their production models. The engine was literally half of a 389ci V8, using the passenger side cylinder bank and it was designed by none other than Smokey Yunick. It used five main bearings, and all of the other beefy stuff found in the 389ci V8s of the era. This included the single cylinder head as well. This baby predates the whole modular Ford situation by decades!

We got tipped off to a bunch of awesome videos featuring a custom built version of this little bastard engine installed into a 1964 Tempest. The engine in these videos has been bored 30-over, had a big honkin’ aluminum cylinder head on it, and most importantly is being force fed by a turbo shoving 25lbs of boost down its throat! The result is a little pissed off sounding engine that makes incredible power. Like more than 600hp to the wheels when it is wicked all the way up and drinking E85.

The car has a relatively small tire on it, looks just ratty enough to be perfect, and sounds all the world like a V8 at idle, but as soon as the revs come up, things get weird in the sound department and they get awesome in the power department. Mickey Thompson loved these engines back in the day and while they certainly aren’t growing on trees now, we’d love to screw around with one too after seeing these videos.

This is daring to be different in all the right ways!

Watch the videos below to see a totally bitchin’ and 100% BangShift approved 1964 Tempest with turbo four Poncho power!

(The dude has swapped over to EFI apparently. Here’s a video of the EFI setup on the engine)

Alan Mulally Announces Retirement From Ford - Will Leave Legacy Of Product Advancement And Success Behind Gallery: 50 Photos of Pontiacs from the BangShift Photo Archives