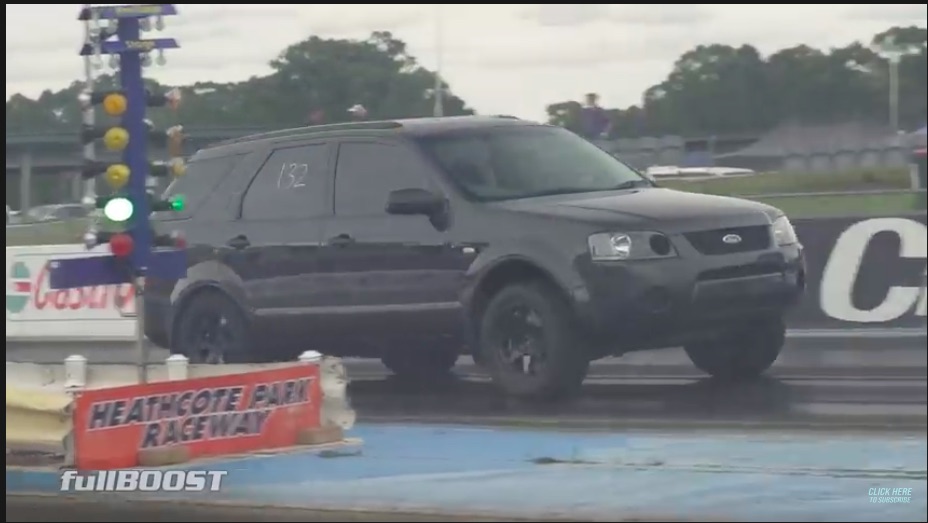 There’s not a lot required to impress us around here. Have a cool, fast, interesting car and we’re pretty much all-in immediately. That’s the case with the video below. You are going to see a Ford Territory SUV in Australia that’s been hot rodded to the max with a 1,500 (wheel) horsepower Barra inline six engine, loads of driveline and transmission upgrades, and slicks on all four corners run nearly into the 8s at crazy speed as well. This thing is totally awesome and if you had told us 10 years ago that some inline six engine from Ford of Australia would not only turn into that country’s version of the 2JZ and LS engine all rolled into one, but that we’d be into them, we’d have called you crazy.

There is something incredible about these Barra engines, which aren’t new or newly hot rodded by any stretch. They have certainly inspired American hot rodders to hit the junkyards from the “Ameri-Barra” GM Atlas inline six engines. We have seen some of those making decent power but nowhere near the 2,000-ish that this one is making to create the 1,500 AWD wheel horsepower, right? We’re not saying they can’t just that we have not seen it done yet.

Pull the parachute pack, swap the slicks off, and take your kids to school. On the weekends lay waste to every muscle car and the majority of weekend bomber drag machines as well. This thing is brutal.