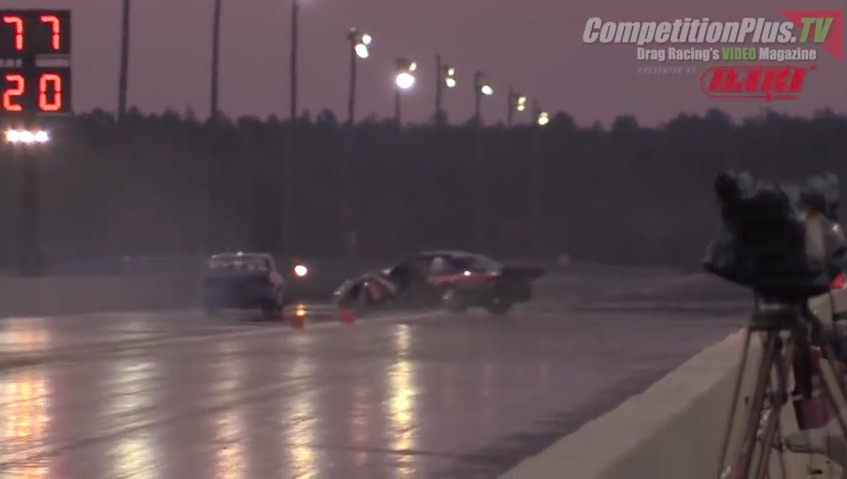 It was a pass that should have been reason for celebration. Allen, Kentucky’s Frank Soldridge had blasted through the traps with a 3.84-second elapsed time and a 203mph speed putting him in the most elite field of radial tire drag racing cars ever. Then it all went wrong. While we have not heard of the definitive cause of his crash we have heard that the rear axle locked up and there’s also a theory that the door being ripped off the car at 203 caused such a massive change in airflow that it literally sucked the car across the track.

As the car made contact it went into barrel rolls and helicopter spins, landing upright in the middle of the track. The force was so bad that the rear axle was completely ripped form the chassis and about the only thing lest to look at was a body skin and the tube chassis that stood up to the onslaught and protected Frank. He was taken to the hospital to get checked out and then he as released last night. We are sure that he is mighty sore this morning.

Frank is one of the good guys and we were really sorry to see this happen to him. We hope he makes a full recovery and is able to make his Mustang back into the 3.80s bad ass car that it was or perhaps replace it with something new. It’s early in the process yet and there’s a lot of work to be done but Frank is a talented guy who loves this sport.

Thank the heavens for today’s chassis and safety gear. This one’s bad.

Best of 2018: Behind The Pit Wall For An American Endurance Racing Miata Best of 2018: This 1985 Chevrolet Caprice Is Church-Fresh And Country Boy Wild!