Best of 2018: This 1985 Chevrolet Caprice Is Church-Fresh And Country Boy Wild! 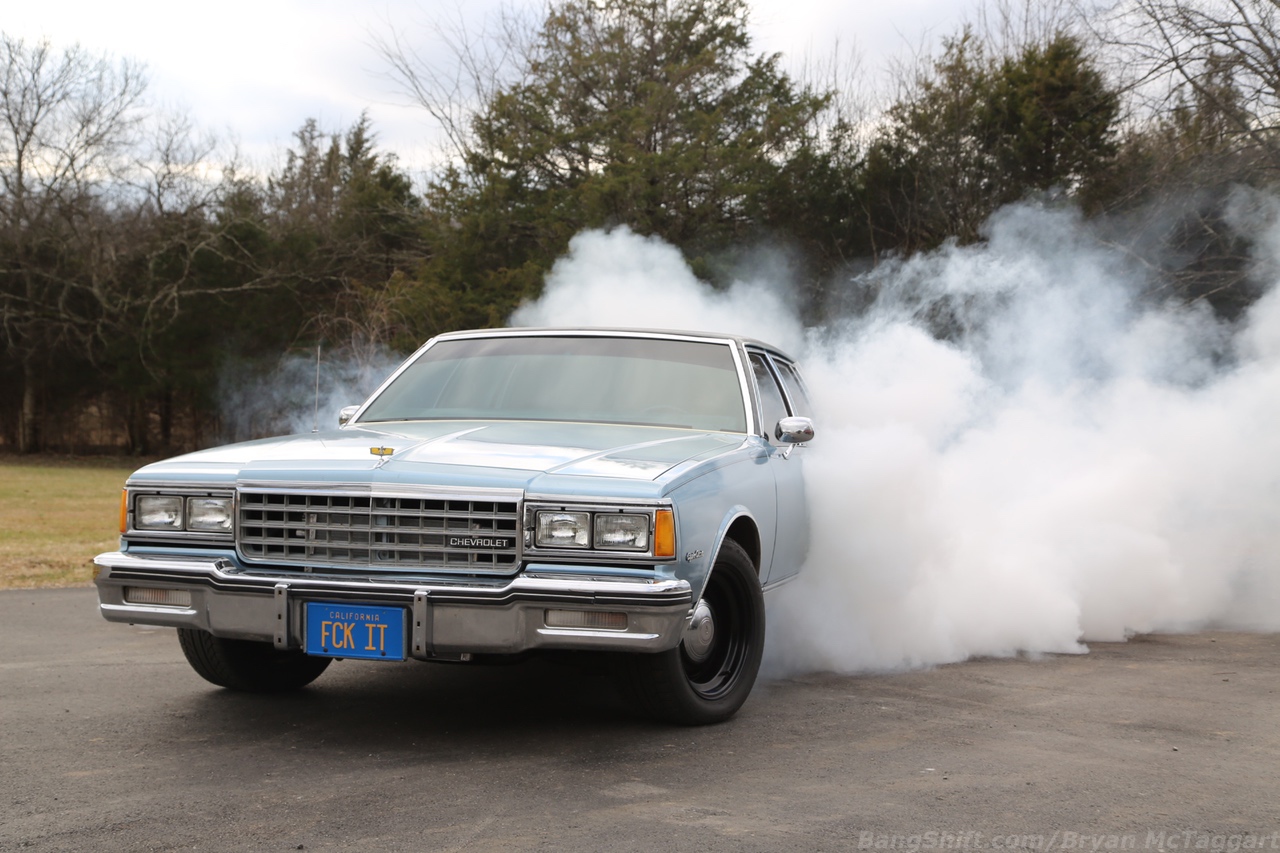 Before I explain anything about the Chevrolet Caprice you are looking at, I should probably explain why I was standing in front of it shooting photos in the first place. We all know that Lohnes has a 9C1 Caprice quite similar to this. All three of us have strong ties to the 1977-96 B-body platform…Chad’s ’56 wagon uses a full chassis from one, and I’ve owned two of the aeroback coupes. All three of us agree that these things rock and are very worthy. But what tipped me off what not that Brian asked for me to check this car out. It was how excited he seemed to be, and how insistent he seemed to be about it. Lohnes can be impressed by a car, but getting him fully geeked-up over one means something is going down. Which meant that I threw a camera into the Mustang and headed down south to Steve’s Automotive in Lebanon, Tennessee to check this B-body out. 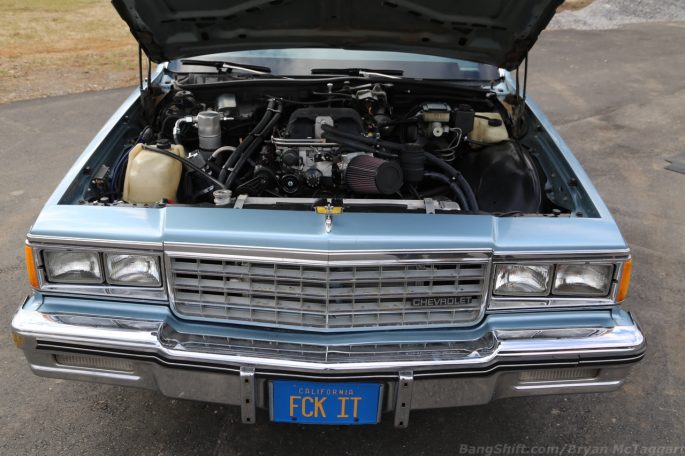 The car is owned by a fellow named Mark Martin. No, not that Mark Martin, but the NASCAR racer and the owner of the Caprice do have something in common: namely, that the rear tires are to be treated with the ultimate prejudice and that the car is meant to be driven as if he bought the walk-away insurance from the rental place with full intention of using it. Donuts, high-RPM stuff, Dukes of Hazzard kind of driving…that’s the idea. And that it must still be useable for everyday driving. Because this isn’t just your random monster build…no…Mr. Martin’s grandmother goes along for rides as well! You see, that family has a lineage of racing and street machines in their back catalog and she likes to go for rides herself in the Chevy. When I arrived to the shop, the car was gone and I was concerned that I had somehow botched the directions. A couple of minutes later, the scream from the Caprice rang out in the hills and a few minutes later, the Caprice pulled into the drive, looking innocent and sounding guilty and unrepentant…just how I like ’em. I was laughing like a villain before the engine shut down. 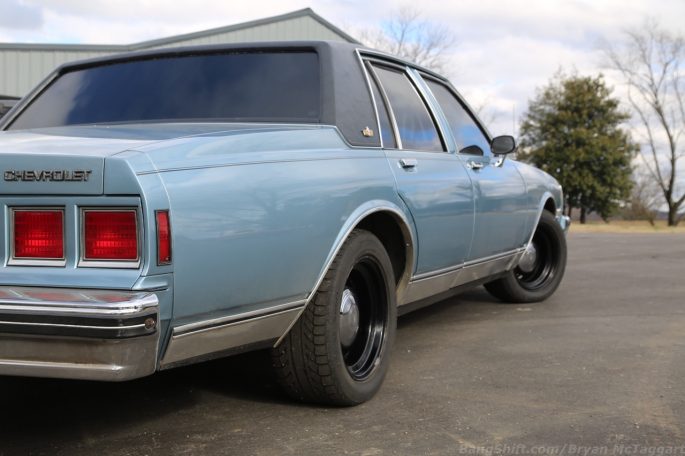 So about the car. Other than some fresh paint and larger Rally wheels with caps, looks pretty much stock, right? Nope. Under the hood is a 2010 LS3 that was pirated from a Camaro that is sporting a Moroso seven-quart oil pan. A Brian Tooley Racing Stage 3 kit, which supplies the cam and platinum springs for the boost that is coming from the LSA blower kit that was supplied by Lance Draeger – LSA Specialist in Michigan. The blower is running a ZL1-style lid and a 2.45″ upper pulley and is cranking somewhere in the neighborhood of about ten pounds of boost. That air and burned mixture is sent out through 1 7/8″ fourth-gen F-body longtube headers into a custom 3″ exhaust with an X-pipe, electric cutouts and Jones Mufflers.  FIC1000 injectors and a 450 GPH fuel pump feed the beast, and a 4L80E with a Circle D 3200 RPM converter sends the grunt out to a 10-bolt with Moser axles, 3.73 gears and an Auburn limited-slip unit. On the Dynojet, the Caprice laid down a best of 604 [email protected] RPM and 528 ft/lbs of [email protected] RPM. And those graphs show two very flat lines from start to finish. 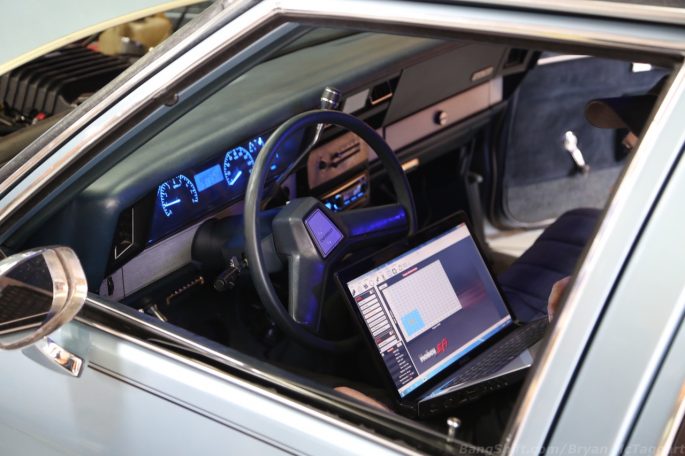 It makes the number and it makes the right noises (especially with the cutouts open) but what about it’s drivability? Outside of a custom console and a Dakota Digital gauge cluster, it’s pretty much stock inside. The air conditioner was retained on the LS3, which meant that a notch had to be made in the frame to fit the compressor. When I arrived, it was lunchtime, so the three guys behind Steve’s Automotive and I piled into the Caprice for a food run. The car will cruise nicely in quiet mode, but hit the toggle switch to let the engine bark. make sure there is nobody nearby and pin the throttle, and you’ll leave a couple hundred feet of proof that you cannot lie your way out of, even with four good-sized dudes in the car. And keep in mind…the car is currently still a work-in-progress. E85 and a bigger fuel system is on the list of planned upgrades, as is a full suspension setup with sway bars, shocks, control arms and whatever else can be thrown at the B-body. And if something breaks between now and then, no worries…Martin’s philosophy is “build, break, build better” so if something about this Caprice kicks the bucket, something even more hardcore will find it’s way into the car. That explains how the formerly LS1 powered car is now the stomper it currently is. 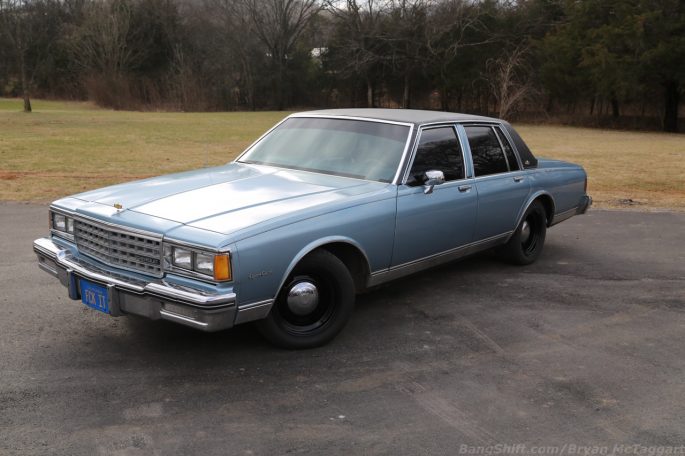 It might still look like a 305-powered wheezer, but rest assured that the Caprice is anything but. Steve Pruitt, Shane Groshong and James Rowlett at Steve’s Automotive have built one hell of a car and Rowlet is working on the tuning aspect, dialing in the Caprice to be even more wicked up than it already is. Of course, while we were discussing how I was going to photograph the car, the subject of doing a burnout came up. Of course, I wanted it to happen, and Rowlett delivered. A few minutes later, after the Caprice had been parked, Pruitt opened the trunk and vented out tire smoke that had yet to escape. Only the wheels and exhaust note give this car away…that, and the manic laughter of those who understand what’s going on here.