Funny Video: Do You Like Your Redneck Boiled Or Smoked? Beer Fueled Decision Making At George Ray’s Wildcat Drag Strip 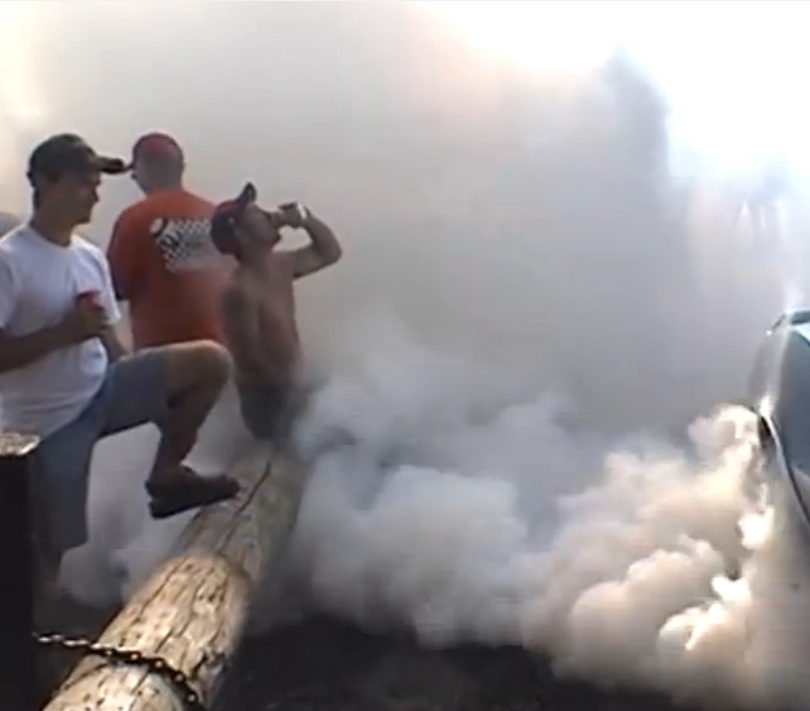 We all know the guy who takes stuff just that one step too far. You know who we’re talking about. Things are going along fine, someone has a funny idea, and then this guy has to take it to an illogical and over the top outcome. That guy is the one sitting on the barrier at George Ray’s Wildcat Drag Strip, chugging a beer, and being absolutely inundated with tire smoke from a Camaro during what looks to be some sort of a burnout contest or side bet deal. To say that this guy gets a face full of it would be the understatement of the decade. We can totally see how this scene came to pass. Someone suggested they get closer to the cars doing burnouts and “too far guy” planted his backside on the barrier. It is pretty funny to watch, especially when he goes into full on chug mode with the beer.

This video was made at George Ray’s Wildcat Dragstrip in Paragould, Arkansas. We’ve preached the gospel on George Ray’s over the years and while you may not agree with the “you pays your money and yous takes your chances” approach, there’s nothing else like the place. It is drag racing without any pre-tense and with very few (ok no) rules. It is pretty much understood that once you pay your money and strap yourself inside the car, you’ve accepted the risks at hand. This too goes for the guy with coal miner’s lung after sitting virtually on top of this Camaro as it boiled the tires (or maybe just the tire) down to the cords. We love the smell of burning rubber because it is the smell of victory, after all. That being said, we wouldn’t want it thick enough to chew!

Buffon, hilarious, or a grandstanding redneck? All three?

PRESS PLAY BELOW TO SEE A REDNECK FAN AT GEORGE RAY’S WILDCAT DRAG STRIP GET MORE THAN HIS SHARE OF TIRE SMOKE!

One thought on “Funny Video: Do You Like Your Redneck Boiled Or Smoked? Beer Fueled Decision Making At George Ray’s Wildcat Drag Strip”