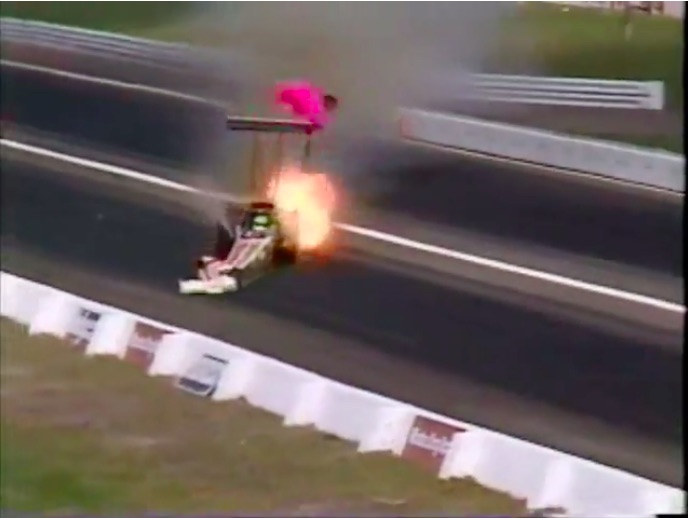 Few people took a more tumultuous route to a top fuel world championship than Gary Ormsby. The California racer had been in the seat of top fuel cars for 25 years as the 1989 season dawned and his team, led by Lee Beard and made of up future stars like Mike Green was poised for action. They did not know how much action they would get though as a string of horrible wrecks tested not only Ormsby’s guts but the team’s strength and stamina.

As you will see in this video, Ormsby suffered a wreck that he really could not have stopped in Sonoma, California. The rear wing of the car failed and he was at the mercy of the air, which crashed him hard and left him skidding upside down on the roll cage. Unlike today’s world of in-house chassis shops and 100 person payroll, Ormsby’s guys were forced to really rush a car into shape by the time the circuit moved to Brainerd, Minnesota just a few short weeks later.

Leading the points and trying to fend off all comers, Ormsby attacked Brainerd with gusto…perhaps too much gusto. As you will see, the car goes into a power wheelie and Ormsby hung with it a little bit too long. The car lands and violently hammers a rounded portion of the wall at the track (remember, Brainerd is a road course where the drag strip is the straight) and then continues across the track and hammers the other wall.

The team was broken and stunned seeing this but they rallied, dragged out an old car and managed to run hard enough until the end of the season to win the title. It was the season of the “green towel” as well. Famously Lee Beard placed a green towel over the throttle pedal of the car whenever it was out to “hide” some technology the team had developed to make the car react faster. While they did make the car react faster, that green towel stole the attention away from other modifications that actually did the job.

Their season was a gutsy one and certainly more work than they planned because of runs like these below.

Classic YouTube: The Many Faces Of The Significant Other On A Ride-Along! Dream Workhorse: This M-715 Dump Truck Needs To Be In Our Driveway Now!

4 thoughts on “Watch Gary Ormsby Suffer A Massive Crash At Brainerd In 1989 – Also, His Sonoma Carnage!”