Wild Video: Here’s A Look Back At Gary Scelzi’s Insane NHRA Weeked In Topeka, Circa 1999 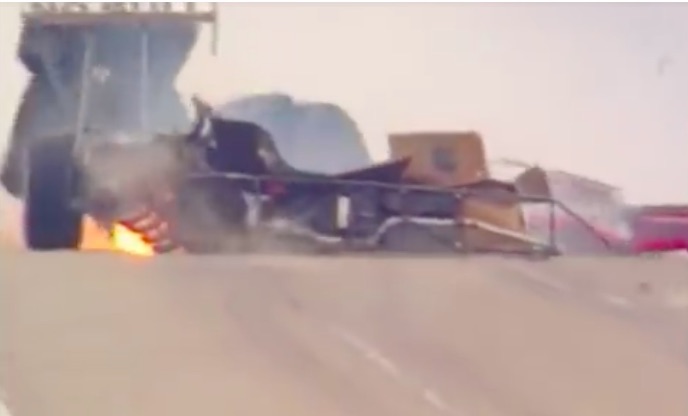 It’s been 20 years since Gary Scelzi’s insane weekend at Heartland Motorsports Park. This was truly one for the ages and a test of not just the grit of the team but the kindness of the racing community. What made it insane? For starters, wreckage. On Friday night during qualifying, the car blew a tire and through the course of that violent situations bent the rear frame rails of the chassis. Scelzi kept it off of the wall but the damage was done and the team swapped in their backup car.

The next day as Scelzi was headed down course in the backup car, the rear of the chassis broke and the crash that followed was intense enough that the car was a complete write-off. The engine, nose, axle, and basically every other part of the car was mangled. They maybe kept the steering wheel…maybe. Enter Frank Parks of the famed Neil and Parks chassis shop that’s located in Kansas.

Not missing the beat the team stripped the car they retired on Friday night and hustled it to Parks’ shop. Brad Hadman effectively met them there and used the Parks shop to repair the car as quickly as possible. Incredibly the team was able to make the first round on Sunday where they won. Then they won the second round and everyone in the place figured that they would win the race, but Joe Amato beat them the semis.

An amazing effort that took place back in 1999!

"We Are QA1", The Video That Shows You Who The Folks Are Behind The Cool Stuff At QA1 Check Out Onboard From Argentina's Biggest Racing Series: Straight-Six Stock Cars!

2 thoughts on “Wild Video: Here’s A Look Back At Gary Scelzi’s Insane NHRA Weeked In Topeka, Circa 1999”